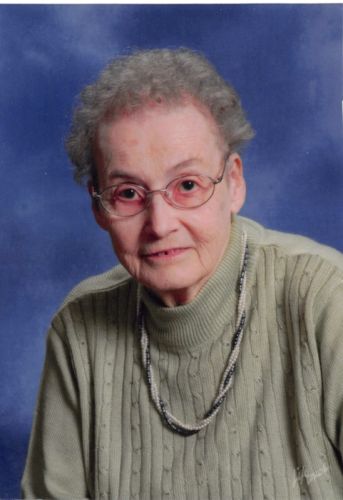 Agnes Regina Karpinski, 90 year old resident of Little Falls died Friday, February 23 at the St. Cloud Hospital. A Mass of Christian Burial will be held on Wednesday, February 28 at 11:30 A.M. at St. Marys Catholic Church in Little Falls. A visitation will be held from 4:00 P.M. to 7:00 P.M. on Tuesday at Emblom Brenny Funeral Service and from 10:00 A.M. to 11:00 A.M. on Wednesday at the funeral home. The burial will be held in the parish cemetery. The Christian Mothers will pray the rosary at 4:30 PM followed by parish prayer will be said at 6:30 P.M. on Tuesday evening.

Agnes Regina Euteneuer was born on April 16, 1927 in Holdingford to the late Henry and Mary (Ricker) Euteneuer. She graduated from Holdingford High School. Agnes moved to Minneapolis and worked for Hardware Mutual Ins. Co for nine years. She was united in marriage to Jerome Plumski on June 21, 1954 in Royalton. Jerome died on October 30, 1961. She continued living in the area. Agnes was united in marriage to John Karpinski on November 18, 1967 in Little Falls. The couple made their home in Little Falls. John died on April 12, 1991. Agnes worked for the city of Little Falls, Police Department as a secretary for 20 year, retiring in 1986. Agnes was a member of St. Marys Catholic Church, Christian Mothers, VFW Auxiliary, American Legion Auxiliary and volunteered for the Morrison County Food Shelf. She enjoyed playing cards, bingo, sewing and spending time with her family at the cabin on Lake Alexander.

To order memorial trees or send flowers to the family in memory of Agnes Regina Karpinski, please visit our flower store.