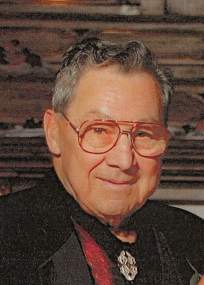 Albinus Al Preimesberger was born in Pierz, Minnesota to the late Henry and Otillia (Merkling) Preimesberger. He attended schools in Pierz, Little Falls, and The Lincoln Extension Institute of Cleveland, Ohio receiving a degree in factory management. He was united in marriage to Shirley Blake in 1942. Al enlisted in the Army that same year and fought in the invasion of Normandy, battles in Central Europe, the battle of Northern France and the battle of the Rhine. He received four bronze battle stars. Al was honorably discharged in 1945. He went back to work at the Rock Island Arsenal of Rock Island, Illinois, manufacturing army artillery. After leaving this position, Al went to work for Bendix Aviation Corporation in Davenport, Iowa manufacturing flight instruments for aircraft. Eventually, Al and family moved to Minneapolis, Minnesota and started a new job at Jet-O- Matic Engineering as a manufacturing engineer working with metal fabrication. His final position was with Everfresh Food Corporation as plant engineer. He worked at this position for several years until his retirement. Upon retirement, Al and Shirley moved to Sullivan Lake, residing there from 1973-1977 allowing Al time to fish, an activity he enjoyed very much. At this time, he worked for the city of Onamia and as a supervisor for Richardson Township. Eventually, the couple moved to Little Falls, Minnesota. He was a member of the VFW and DAV.

To order memorial trees or send flowers to the family in memory of Albinus "Al" Preimesberger, please visit our flower store.