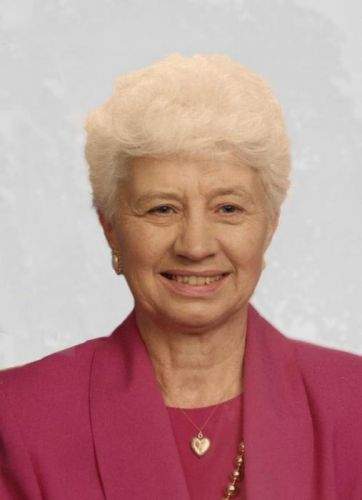 Auralia Rose (Kahlhamer) Cimenski, age 92, passed away peacefully on Wednesday, November 18, 2020 in Quiet Oaks Hospice House in St. Augusta. Mass of Christian Burial will be at Holy Trinity Catholic Church in Royalton on Sunday, November 22, at 2:00 P.M. with visitation starting at 12:00 P.M. until the hour of service at the church. Burial will be in the parish cemetery.

She was born on December 28, 1927 in Lastrup, MN to Bruno Kahlhamer and Christine (Donnay) Kahlhamer and grew up in central MN. She graduated from St. Francis High School in Little Falls, MN as the class salutatorian. She met her husband, Joseph Cimenski, at a dance in Flensburg. They were married on June 19, 1945 at Seven Dolors Catholic Church in Albany, MN and recently celebrated their 75th wedding anniversary.

For the first year of their marriage, they traveled in a motor home following Joes construction work. Then, they moved their motor home to the Cimenski family farm in Little Falls where they started their family. They settled in Royalton in 1948 and have remained there ever since. Auralia was active at Holy Trinity Catholic Church, serving as a religious education teacher and a member of the Christian Mothers. She worked as a teachers aide at Royalton Elementary School and later as the cook at the Royalton High School. She was generous with her time and numerous talents - many women and children in the neighborhood came to see her for haircuts or permanents. Later in life, she started her own business as a caterer, becoming renowned for her wonderful roasted chicken and stuffing. She served as a Head Election Judge for many years and was active in the American Legion Auxiliary, including terms as an officer. She belonged to Royalton Study Club and volunteered on the Royalton Library Board.

She was an avid reader and letter writer. She loved working in her one-acre garden, always looking forward to the harvest season, when she would can and freeze enough produce to feed her large family for the winter months. She was an expert seamstress and knitter, making many, many mittens for her children. She enjoyed deer hunting and fishing, mostly because it gave her an opportunity to be on outdoor adventures with her family. She was an exceptional dancer, including the hop polka. However, her favorite activity was socializing; if you were anywhere near her, she wanted to know your name and a little bit about you - and she would remember it. If you had a good joke to tell her, she would reward you with a hearty belly laugh.

Her favorite roles were wife and mother. She had 13 children, 48 grandchildren, and 77 great-grandchildren. She loved visits from the children and often babysat her grandkids; her first great-great grandchild is due in December.

She is survived by the love of her life, Joe, to whom she was married for over 75 years; her children: Joe with Melanie, Dan with Kathie, daughter-in-law Mary Jane Thielges with Randy, Mary, Jeanette with Gary Benusa, Connie with Jim Anderson, Elynn with Chet Welle, Steve with Shelley, Bob with Lori, Ginny with Leon Duschner, Tony with Pam, Patti Hoff, and Tom with Hyonchu; her siblings: Verda Reinke, Mary (Ralph) Mueller, Rick Kahlhamer, and Pat Olson, as well as her 48 grandchildren and 77 great-grandchildren.

She was preceded in death by her parents, her brother Norman Kahlhamer, her son, Greg Cimenski, her grandson, Jacob Cimenski and his mother, Joyce.

To order memorial trees or send flowers to the family in memory of Auralia Rose Cimenski, please visit our flower store.