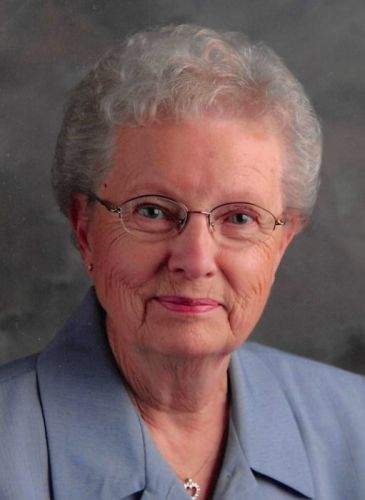 A visitation will take place at the Emblom Brenny Funeral Service Chapel on Thursday, May 14, 2020. The family will be available to give your condolences to via social distancing. A private committal will take place later that day at the St. Marys Catholic Cemetery in Little Falls.

Bernie was born April 10, 1928 in Bowlus, Morrison County, MN to the late Anthony and Anna (Peka) Jendro. She grew up in Bowlus and Royalton areas, graduating from Royalton High School in 1946.

Bernie was united in marriage to Roderick (Rod) Grell on April 9, 1953 in St. Marys Catholic Church in Little Falls. The couple made their home in Little Falls throughout their married life. Bernie was a stay at home mom to four daughters. She was involved in her church where she volunteered for many parish activities and was a religious education instructor for special needs children. She was a member of the Christian Mothers and Deanery. Bernie was also involved in community activities as a member of the Morrison County Historical Society, Extension group, Quilting club and Polish Echos club. She volunteered at the Clothes Review and Charles A. Weyerhaeuser Memorial Museum. Bernie and Rod enjoyed spending time with family and friends at their lake cottage, fishing, playing cards and bean bags. They enjoyed traveling in their motor home and camping with the Good Sam Club. In later years they wintered in Arizona. After Rods passing, Bernie enjoyed playing cards and going on trips with her friends including a mission trip to Guatemala. Bernie was extensively involved in tracing family genealogy through much research including traveling to Poland to trace her roots. She compiled several books documenting the family heritage.

She was an avid quilter and seamstress making many clothes for her daughters and grandchildren. Each child and grandchild have quilts lovingly made especially for them. Bernie used her sewing talents to make baby blankets and other items for the missions and various charities. Bernie is survived by daughters, Cynthia Kazeck and husband, Doug of Becker, Mary Lashinski of Little Falls, Nancy Karasch and husband Jerome of Avon, and Gail Stommes and husband Tom of St. Cloud; grandchildren, Jessica White, Stephen Kazeck, Kristin Freitag, Timothy Lashinski, Elizabeth Lashinski, Michael Holmstrom, Matthew Holmstrom and Melissa Stommes; 11 great-grandchildren.

She was preceded in death by her parents; husband, Rod; granddaughter, Rebecca Lashinski and sister, Adeline Masog.

To order memorial trees or send flowers to the family in memory of Bernadine "Bernie" Marie Grell, please visit our flower store.