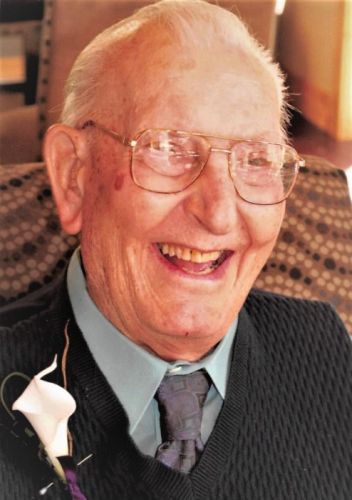 Charles Carly Lochner, 93-year-old, of Pierz, passed away peacefully surrounded by his family on Sunday, August 30, 2020 at the Pierz Villa. A Mass of Christian Burial will take place on Thursday, September 3, 2020 at St. Josephs Catholic Church in Pierz at 11:00 AM. Visitation will take place prior to Mass from 9:00 - 11:00 A.M. also at the church. Burial will immediately follow at the St. Josephs Cemetery in Pierz.

Charles was born on February 4, 1927 in Pierz Township to the late Math and Dora (Hoheisel) Lochner. Carly attended District #98 country school until the eighth grade. He attended and graduated from Little Falls High School with the class of 1945. He served his country during World War II. He returned from Germany and was united in marriage to Anna Wilkes on October 25, 1949 at St. Josephs Catholic Church in Pierz. The couple would have celebrated 71 years of marriage in October. Together they raised 9 children. Charles farmed on the family homestead and also worked at Crestliner and Larson Boats from 1959-1976. He loved hunting, fishing, playing cards, and watching the MN Twins. Carly and Ann enjoyed many trips together, traveling from California, Wisconsin, Nebraska, Tennessee, Alaska and the National Parks. Charles especially loved spending time with family. Carly was a man of priorities, God, family, work, honesty and fairness.

He was preceded in death by his parents; sons, David and Paul Lochner; brothers, Herman, Wilfred and Leroy: sisters, Alvina Brandl and Edna Mueller.

Arrangements are with the Emblom Brenny Funeral Service of Pierz. 320-632-4393

To order memorial trees or send flowers to the family in memory of Charles "Carly" Lochner, please visit our flower store.