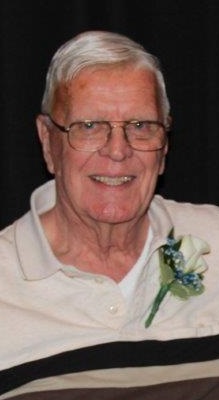 Clayton Harleth Olson was born on June 30, 1927 in Swanville, Minnesota the son of Carl G. Hulda (Peterson) Olson. He grew up in Swanville where he attended a one room school house and graduated from Swanville High School, Class of 1944. Following his schooling, he joined the Air Corp service for 18 months. After his time in the Air Corp, he sailed the Great Lakes with the Merchant Marines for six seasons. Upon his return to Little Falls he applied for a position with the Little Falls Police Department and began his career in law enforcement. Clayton served as the Chief of Police in Little Falls for over 28 years. He retired in 1986. On June 8, 1957, Clayton was united in marriage to Betty Girtz at St. Josephs Catholic Church in Pierz. The couple made their home in Little Falls and were blessed with five children; Melanie, Michelle, Maura, Mark, and Michael. Betty died in 1972, and on November 4, 1972, Clayton was united in marriage to Eileen Ploof at St. Marys Catholic Church in Little Falls. He was honored to become the father figure to Eileens children, Jim, John, and Mary. Clayton enjoyed hunting, fishing, gardening and woodworking. He was a member of St. Marys Catholic Church in Little Falls, the Little Falls American Legion, Post #46 and served on the Little Falls City Council for 12 years. Claytons family fondly remembers his adoring love of Eileen his wife, unconditional care of his large family, his humble integrity, honesty, commonsense, his approach to life and his huge warm smile that drew you into his heart.

Clayton was preceded in death by his parents; wife, Betty Girtz; son, John Ploof, and a sister, Elaine Mueller.

To order memorial trees or send flowers to the family in memory of Clayton H. Olson, please visit our flower store.