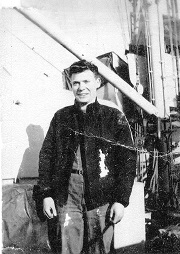 Jerome was born and raised in Hankinson, ND. where he attended St. Francis Academy. He enlisted in the Navy in 1942 and was honorably discharged in 1946. He attended college for two years before re-enlisting for another 22 years in the Naval Reserve as a Chief Petty Officer. In 1949, Jerome married Irene Ohotto of Bowlus. The couple were married for 55 years and had 7 children (Kathleen, Kevin, Kim, Kent, Kara, Kelly and Keith), 21 grandchildren, 38 great grandchildren, and 2 great-great grandchildren. During their marriage, Jerome and Irene lived in the Twin Cities area and on Irenes Third Generation Century Farm in Bowlus before retiring to St. Benedicts Village in Monticello, MN.

Jerome attended St. Johns University before being ordained a Deacon in 1982. He performed most of his diaconate service at St. Stanislaus Kostka, and in surrounding parishes. He was also Religious Education Director for Holy Trinity Church in Royalton, MN for seven years.

He was a Fourth Degree and Life member of the Knights of Columbus, and member of the Veterans of Foreign Wars. He is preceded in death by parents, Adam and Elizabeth (Portner) Roth; wife Irene Mary (Ohotto), son Kevin Roth, daughter-in-law Gloria Roth and great grandchildren Jack Holker, Blaise LeBlanc and Cora Roth.

Arrangements are with Emblom Brenny Funeral Service in Little Falls.

To order memorial trees or send flowers to the family in memory of Deacon Jerome "Jerry" Roth, please visit our flower store.