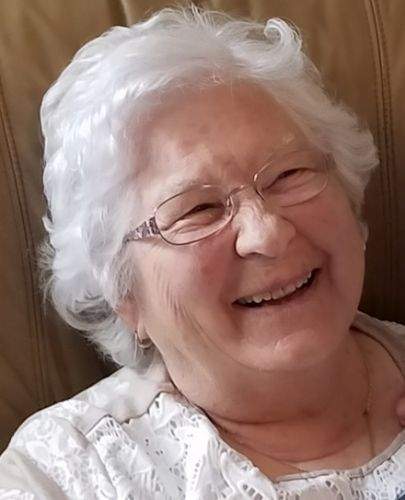 Delores Klisch, 82 year old resident of Royalton died Monday, July 2 at the St. Cloud Hospital with her family by her side. A Mass of Christian Burial will be held on Monday, 9 at 10:30 A.M. at Holy Trinity Catholic Church in Royalton with Father Roger Klassen and Father Laurn Virnig officiating. The burial will be held in the parish cemetery. A visitation will be held on Sunday, July 8 from 3:00 to 7:00 P.M.at Holy Trinity Church and from 9:00-10:30 AM on Monday at the church.

Delores Cordelia Kalis was born January 19, 1936 in Bellevue Township, Morrison County to the late Frank and Helen (Kroll) Kalis. She resided in Bellevue and Pierz Townships. Delores attended District #8 country school. She was united in marriage to Francis Frank Klisch on November 24, 1955. The couple made their home in Royalton where she was an active stay at home mother. She cared for the couples eight children. She enjoyed quilting for the children and grandchildren, canning, selling eggs, traveling to Washington DC, Black Hills South Dakota and numerous other places in the couples motorhome. Here real enjoyment was raising her children and grandchildren. Delores was a member or Holy Trinity Catholic Church, Christian Mothers, quilting for missions, Bible study and the Royalton School Board.

To order memorial trees or send flowers to the family in memory of Delores Cordelia Klisch, please visit our flower store.