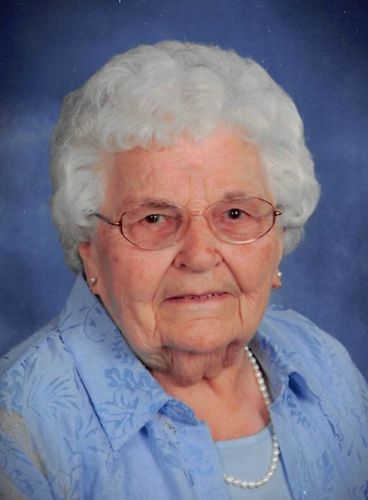 Dorothy (Pouliot) Schraut, 95-year-old resident of Pierz died May 1 at the Pierz Villa. A private family grave side will be held at St. Johns Catholic Cemetery in Lastrup. A Memorial Service will be held at later date after the COVID-19 restrictions are lifted.

Dorothy was born April 7, 1925 to the late Roman and Alma (Pepin) Pouliot in Loretto, Minnesota. She attended grade school in Loretto, MN and graduated from Wayzata High School. She married John Schraut on October 6, 1948 in Loretto. The couple made their home in Minneapolis for a short time. They moved to Lastrup in 1949 where they farmed and raised their 7 children. John died January 5, 1981. Dorothy moved later that year to Pierz. She worked and volunteered at the Pierz Villa. She was a member of the Pierz and Lastrup Christian Mothers and the Pierz American Legion Auxiliary. Dorothy enjoyed playing cards with family and friends, crocheting, quilting, gardening, baking and making fry bread. Dorothy was a gracious host. She would always have baked goods setting out on the counter for everyone to enjoy.

She was preceded in death by her parents; husband, John on January 5, 1981; son in-law, William Lashinski; four brothers and seven sisters.

The arrangements for Dorothy are with Emblom Brenny Funeral Service in Pierz. 320-632-4393.

To order memorial trees or send flowers to the family in memory of Dorothy Ann Schraut, please visit our flower store.