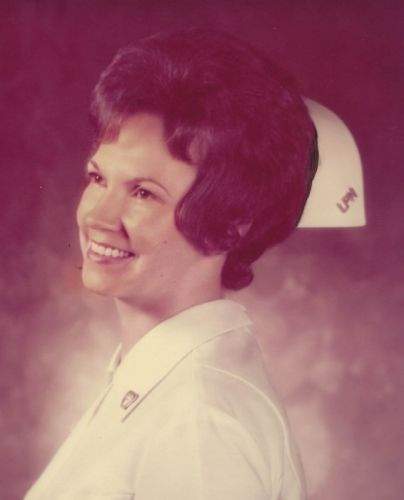 Dorothy Gertrude Tabatt was born on September 11, 1936 at St. Gabriels Hospital in Little Falls to the late Herbert and Wanda (Sobiech) Tabatt. She grew up in the Little Falls area. She attended St. Francis High School and graduated with the class of 1954. She married the love ofher life, Syl Waldvogel on June 6, 1955 at Our Lady of Lourdes Catholic Church in Little Falls. The couple made their home in Little Falls. She worked at St. Gabriels Hospital as a nursing assistant for a few years. She then attended college while she was pregnant with her ninth child and received her LPN degree. She was a hard and dedicated worker and enjoyed her nursing career at St. Gabriels Hospital, Family Medical Center, Womens and Childrens Clinic and the Long Prairie Centra Care Clinic. Dorothy enjoyed sewing, crocheting, cross word puzzles, country music, baking, the Minnesota Twins and helping with family genealogy. She was especially proud of her nine children, grandchildren and great-grandchildren who she enjoyed spending time with whenever she had the chance. She loved her diet mountain dew, Funyuns, pizza with a half of beer, cinnamon raisin bread and fresh produce. Dorothys purse was always full of Juicy Fruit, Big Red gum and Mentos for the grandkids. Her last meal was her favorite meal from McDonalds. She was a member of St. Marys Church and was active with the Christian Mothers. She was also a cub scout den mother for many years.

The arrangements for Dorothy are with Emblom Brenny Funeral Service. 320-632-4393

To order memorial trees or send flowers to the family in memory of Dorothy Waldvogel, please visit our flower store.