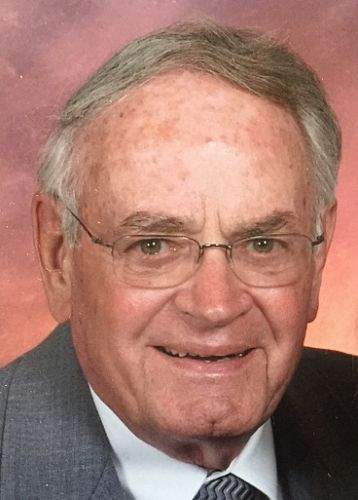 In September 1955, John married his high school sweetheart, Nancy Nelson. Following graduation from the School of Dentistry in the spring of 1957, he joined the Army. John and Nancy were stationed at Fort Sam Houston in San Antonio, Texas, where John served in the Army Dental Corps.

In 1960, John and Nancy moved to Little Falls, where he joined Falls Court Dentists. He practiced there for more than 30 years until his retirement in 1992. In the early 1980s, John also taught as an adjunct professor at the University of Minnesota School of Dentistry. John was an avid golfer and downhill skier, enjoyed owning and driving old cars including his 1929 Model A Ford, and loved spending time with his family and many friends from Little Falls and Sun City, Arizona, where he and Nancy spent their winters following his retirement. He was a member of the Little Falls Lions Club and First United Church.

He is survived by Nancy, his wife of 61 years; three children: Garrett ( Leslie) Starr of Mankato, Sara Starr ( Peter Weltchek) of San Francisco, and Jack ( Lori) Starr of Chaska; and his son-in-law, Scott Gerling of Grand Rapids, MN. He was preceded in death by his daughter, Susan Gerling, and his two sisters, Helen Nelson and Margaret McLeod. He is also survived by ten grandchildren: Matthew and Adam Starr, Graham, Tyler and Elizabeth Gerling, Charlie and Owen Weltchek, and Abby, Natalie and Luke Starr; and three great grandchildren: Ayla Gerling, and Grayson and Maxwell Gerling.

Visitation will be held on Monday, April 24 starting at 9:00 am at First United Church, followed by a 10:30 am service. The inurnment service will be held at 1:00 pm at the Minnesota State Veterans Cemetery north of Little Falls, MN. The military rites will be conducted by the Little Falls American Legion Post #46.

In lieu of flowers the family is requesting donations be made to the National Parkinson Foundation.

To order memorial trees or send flowers to the family in memory of Dr. John Starr, DDS, please visit our flower store.