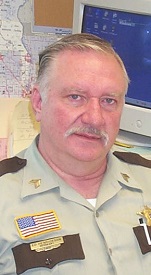 Edward R. Hendrickson was born on February 27, 1947, in Little Falls, MN to the late Clarence and Frances (Plumski) Hendrickson. He grew up and attended school in Little Falls graduating with the class of 1965. Ed served his country in the United States Army from April 14, 1966 until his honorable discharge on January 14, 1969. He received the following accolades during his military career: National Defense Service Medal, Marksman Badge and Sharpshooter Badge. Ed returned to Minnesota after his discharge and attended law enforcement training in the Twin Cities. He worked for the Morrison County Sheriffs Office as a Deputy Sheriff for 29 and a half years. He was united in marriage to JoAnn Gangl in June 1985 at Our Lady Of Lourdes Catholic Church in Little Falls, MN. The couple made their Home on Green Prairie Lake for a few years. Ed treasured his time spent living on the lake with his wife, Jo. He enjoyed deer hunting with friends, fishing, gardening, small game hunting, snowmobiling and having coffee with the guys. Ed loved watching eagles soar over the lake. The last few years Ed started to connect with distant relatives.

Left to cherish his memory is his wife, JoAnn Jo Hendrickson of Cushing; aunt, Alice Plumski of Randall, mother-in-law, Anna Gangl and many extended family and friends.

He was preceded in death by his parents, Clarence and Frances Hendrickson; half-brother, Alvin Hendrickson; father-in-law, Joseph B. Gangl and several aunts and uncles.

To order memorial trees or send flowers to the family in memory of Edward "Ed" Hendrickson, please visit our flower store.