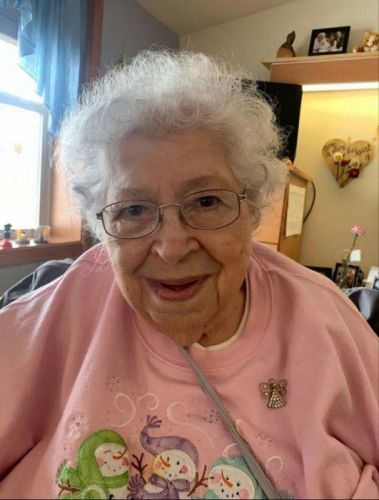 Elaine Grittner , 92, of Pierz, died Friday, December 18, 2020 at St. Gabriels Hospital in Little Falls. A Mass of Christian Burial will be held on Monday, December 21 at 11:00 A.M.at St. Josephs Catholic Church in Pierz with Father Kenneth Popp officiating. A visitation will be held on Monday, December 21 from 9:30 A.M. until the hour of the service at the church. The interment will be in the St. Josephs Catholic Cemetery in Pierz. The family request those attending the service to please wear a mask and respect the social distancing guidelines from the MDH.

She was born September 15, 1928 in Morrison County, Minnesota the daughter of Herman and Angeline (Merkling) Block. She was united in marriage to Edward Grittner on November 27, 1946 at St. Michaels Catholic Church in Buckman, MN. The couple lived with Elaines parents for one year and then purchased Eds home farm where they lived and farmed for 31 years. The couple lived in Isle, MN from 1977 until 1988. They retired and moved to Pierz residing at the Country Place Apartments. Edward died on February 20, 2007. Elaine continued living in Pierz until her death. Elaine enjoyed playing bingo and doing most crafts especially, knitting and crocheting. She was a member of St. Josephs Catholic Church and was active with the Christian Mothers.

She was preceded in death by parents, Herman (Angeline) Block; husband, Edward Grittner; brothers, Rolland and Don Block and a grandson, William Johnson.

In lieu of flowers memorials are preferred to Holy Trinity Catholic Schools in Pierz.

The family would like to thank the Pierz Villa Staff for the wonderful care and friendship theyprovided to Elaine during her time with you. Elaine always felt at home with the staff and residents.

To order memorial trees or send flowers to the family in memory of Elaine Grittner, please visit our flower store.