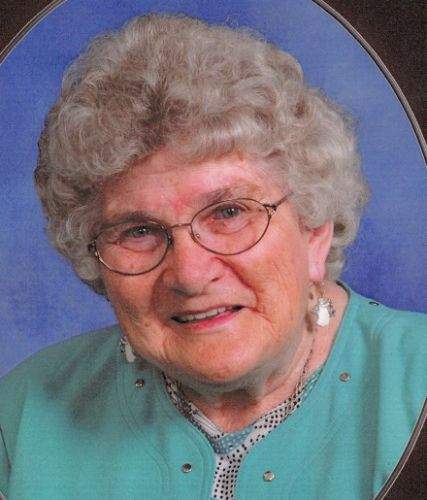 Emily Dehler, 90 year old resident of Pierz, formerly of Buckman died peacefully in the early mornings hours of Monday, January 15 at the Pierz Villa surrounded by her loving family. A Mass of Christian Burial will be held on Friday, January 19 at 11:00 A.M. at St. Michaels Catholic Church in Buckman with Rev. David Maciej. A visitation will be from 4:00-8:00 P.M. and from 10:00 A.M. until the hour of service on Friday at the church. All visitation times will be held at St. Michaels Church Buckman. The Christian Mothers and St. Michaels Catholic Aid will Pray the Rosary at 4:30 P.M. there will be no Christian Womens meeting you will be praying instead and Parish Prayer will be held at 7:30 P.M. on Thursday evening at the church.

Emily May (Clark) Dehler was the first born of George and Lucy (Peterson) Clark as the sun was rising up on Cinnosam Road, Lake Edward Township, MN. She was raised with her one sister and three brothers by the Gull River near Brainerd, MN. She attended Pillager High School, graduating with top honors of her class in 1945. Emily worked summer waitress jobs at Maddens Resort and other area resorts throughout high school, along with helping on the family farm and milking cows by hand. After graduation, she enrolled in Teachers Training School in Little Falls, MN. She also waitressed at the Pine Edge Inn in Little Falls during this time as well. While in Teachers Training, she was set up on a blind date with a friends brother (that friend later becoming sister-in-law Margaret). While courting, Emily began her first teaching job at The Little Green School House two miles east of Pierz, rooming with the Werner Virnig family. Roman Dehler and Emily Clark were married on August 23, 1947 at St. Michaels Catholic Church in Buckman, MN. They purchased the Dehler home place and lived there for the next 42 years. Throughout her marriage, while raising thirteen children, Emily continued her love of teaching on and off at several area schools. Her main schools were Dixeville Country School and St. Michaels Parochial School in Buckman. She was a very conscientious, well liked and regarded teacher. She retired, but continued substituting at local schools and after full retirement, she became a Foster Grandparent, helping in the class rooms of Holy Trinity School in Pierz. After Romans death in 1980, she moved to Brainerd, reconnecting and spending time with her sister, Addie. After several years in Brainerd, she returned to Pierz and lived at Kaminic Lane Apartments for eighteen years. She moved to the Pierz Villa in 2015. She was a woman of strong faith being Catholic convert before getting married. She was a proud member of the St. Michaels Christian Mothers Society for over 60 years. She was a great and loving mother, grandmother, neighbor and friend to many.

To order memorial trees or send flowers to the family in memory of Emily Dehler, please visit our flower store.