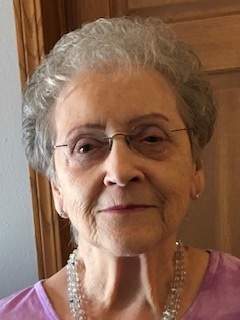 Erna Mae Meyer was born on December 22, 1936 in Pierz to the late Michael and Ernestine (Nagel) Meyer. She was united in marriage to George Peter Wetzel in December of 1961 in Little Falls. The couple made their home in Little Falls, where Erna was a devoted homemaker. She was a devoted wife, mother and grandmother. She was a dedicated friend to many. She was a member of the American Legion Auxiliary, Lindbergh PTA and St. Marys Church. She was asked to be a member of many more as she had a unique talent for making even the most mundane events fun and entertaining. She loved to play bridge. She was incredibly involved in her childrens activities. She baked countless casseroles for potlucks, sewed theatre costumes, and attended every single athletic event in which her kids participated. Her cheers could be heard throughout any gym or over any football field. She was a mother to all. If you ate at her table or were a friend of one of her children, she claimed you as one of her own. Nobody ever went hungry in her home. She was kind and compassionate to all. Her humor and her laughter were gifts to us all. She made an impact on people, without even trying. She cared for her grandchildren in lieu of daycare, never accepting so much as a penny. She performed magic on any crying baby, lulling it to sleep in short order. She was a tremendous cook having made full meals since the second grade. She survived malignant, metastatic melanoma for 39 years and stage four ovarian cancer for 9 years. She battled both like a warrior.

She was preceded in death by her parents, Michael and Ernestine Meyer; husband, George P. Wetzel, Sr.

To order memorial trees or send flowers to the family in memory of Erna Mae Wetzel, please visit our flower store.