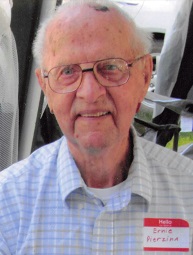 Ernest Pierzina was born May 29, 1921 in Bowlus, MN to the late Theodore and Agnes (Phillips) Pierzina. Ernie attended rural country school as a young boy and graduated from Little Falls High School in 1940. Ernie enjoyed playing baseball in the Victory League for Swan River. He served his country in the Southwest Pacific as a United States Navy Air Corps pilot from 1942 until being honorably discharged in 1945. Ernie was united in marriage to Dorothy Zilka on August 29, 1951. He worked for Northwestern Bell and US West Telephone Company for 39 years. Ernie enjoyed hunting, fishing, growing a variety of vegetables. He was a lifetime member of the Little Falls American Legion, Little Falls VFW, Knights of Columbus and St. Marys Catholic Church.

The Ernest Pierzina family is grateful for the loving care provided by the staff of Brookdale (Sauk Rapids) and Bridgeway Estates (Little Falls).

To order memorial trees or send flowers to the family in memory of Ernest Anton Pierzina, please visit our flower store.