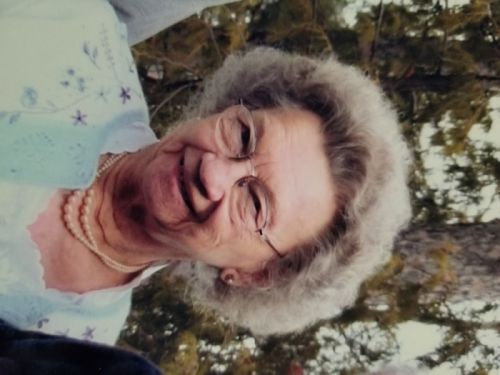 Esther Hines LeBlanc was born at the family west side home, April 19, 1922, in Little Falls, Minnesota. She attended 8 years of elementary school at the former famous Antlers Hotel building. She graduated from Little Falls High School in 1940. Esther worked as office clerk for the federal Department of the Corps of Engineers, Camp Ripley, Little Falls, Minnesota. Later, she transferred with the Corps of Engineers to the airport in Fargo, North Dakota which included occasional trips to the Corps in Bismark, ND. She married Jerome Adelore LeBlanc on November 22, 1944, at Our Lady of Lourdes Catholic Church, Little Falls, Minnesota. Esther worked at the Veterans Administration Hospital, Saint Cloud, Minnesota, as a medical stenographer. After Jerome LeBlancs Honorable discharge from the Army Air Corps, Jerome and Esther lived in the city of Little Falls, Minnesota. Esther then worked as a desk clerk for the county recorder, in the Register of Deeds office at the Morrison County Courthouse, Little Falls, Minnesota. She did typing and microfilming of documents. She enjoyed dancing, playing cards, embroidering, cooking, baking, watching TV, listening to news on the radio, and traveling. She especially loved being with family, relatives and friends. She is a member of the St Marys and Our Lady of Lourdes Catholic Church, charter and life member of Veterans of Foreign War Auxiliary, Christian Mothers Society, St Annes Society, and Little Falls Senior Center. She volunteered at the Morrison County Food Shelf, Little Falls Senior Center, VFW Auxiliary, Lutheran Care Center, and St Marys Church. In appreciation of civic contributions, the citizens of Little Falls gave her the Mayors Pride Award. At 94 years of age she was still raking leaves and shoveling snow.

To order memorial trees or send flowers to the family in memory of Esther LeBlanc, please visit our flower store.