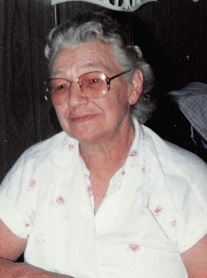 Esther Suess was born on December 31, 1928 in Little Falls to the late George and Rose (Heuring) Suess. The family made their home in rural Buckman. Esther attended rural country school near Buckman until the eighth grade. After her schooling she returned to the family farm where helped for many years. Her father also referred to her as his Best Farm Hand. She was united in marriage to Herman Poser on June 8, 1948 at St. Josephs Catholic Church in Pierz. The couple made their home in Pierz for several years. She worked for Crestliner Boats for a few years. Esther also worked as a cook with Hildegard Block for many years catering weddings, anniversaries and special events through out the Pierz area. She enjoyed gardening, canning, crocheting, playing cards, dancing and singing. Esther got her start in bowling setting lanes in the basement of the Buckman church. She went on to bowl in many leagues for several years. Esther was a member of the Pierz Bowling League and St. Josephs Church in Pierz, MN.

The arrangements for Esther are with Emblom Brenny Funeral Service in Pierz, MN.

To order memorial trees or send flowers to the family in memory of Esther Poser, please visit our flower store.