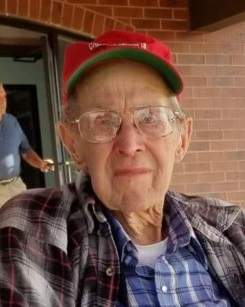 Eugene Doble, 94-year-old resident of Little Falls / Royalton died Thursday, May 7 at the Little Falls Care Center in Little Falls. A private grave side service will be held at Holy Trinity Catholic Cemetery in Royalton, MN.

Eugene Doble was born on July 3, 1925 in Rice, MN to the late Fredrick and Gertrude (Zuelger) Doble. He attended rural country school until the eighth grade near Rice, MN. As a young man he worked in the shipyards in California and returning to Minnesota a few years later. He was united in marriage to Hildegard Reller in Royalton, MN. The couple made their home on the family farm near Royalton. Eugene farmed from the 50s - 90s on the Doble family farm. Throughout his life he worked for LK Redi Mix in Little Falls, Bob Muske Construction, HM Jones Construction and the Little Falls John Deere dealer shop. He enjoyed raising ponies, wood working, flower gardening and visiting at the local coffee shops. Eugene treasured his time spent with family, especially his grandchildren and great-grandchildren. He attended Holy Trinity Catholic Church in Royalton.

The arrangements for Eugene Doble are with Emblom Brenny Funeral Service in Little Falls.

To order memorial trees or send flowers to the family in memory of Eugene Doble, please visit our flower store.