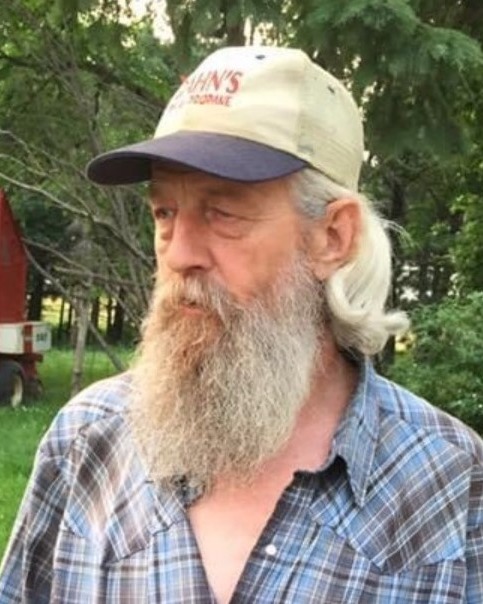 Eugene Elmer Larson, 66-year-old resident of Little Falls passed away on April 13th at his residence. A Mass of Christian Burial will be held on Friday, April 22 at 11:00 AM at St. Stanislaus Catholic Church in Sobieski with Fr. Jimmy Joseph officiating. Burial will be in the parish cemetery. A visitation will be held from 9:00 A.M. until the hour of the service at the church on Friday.

Eugene had two children, Edward Scott Larson and Jennifer Ann Larson. He was the grandfather of two, Ahren Edward and Gabriella Rose.

Eugene was born on October 8, 1955 (the fifth child of ten children) to the late Elmer and Josephine (Kalis) Larson. They lived in Minneapolis until 1963. When Eugene was 7 1/2, the family moved to a farm in Sobieski, MN where he spent the majority of his life, with the exception of a short time in ND.

For many years Eugene worked with his mother milking cows and working the land. He also did some trucking, raising livestock and multiple other jobs in the farming industry. He prided himself at being a good cook and being handy at fixing things. You would find Eugene, every afternoon in Nevada, at the Ponderosa, watching the Cartwright's on Bonanza. Eugene belonged to St. Stanislaus Catholic Church in Sobieski, MN.

He was preceded in death by his parents, Elmer and Josephine; his son, Edward; sisters, Marie Wolters, Janet Lashinski and brother-in-law, John Arnold.

To order memorial trees or send flowers to the family in memory of Eugene Larson, please visit our flower store.