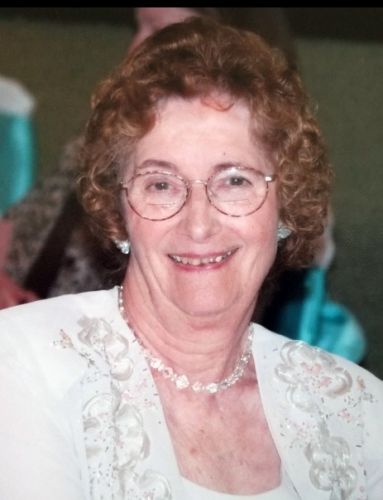 Evelyn T. Hilmerson, age 88, of Little Falls, MN, entered into Eternal Life surrounded by her family on May 1, 2018, after a courageous battle with congestive heart failure. Mass of Christian Burial will be held 11:00 A.M. Friday May 4, 2018 at Holy Family Catholic Church in Belle Prairie with Father Joseph Herzing officiating. Visitation will be one hour prior to services at the church on Friday and burial will be at the parish cemetery in Belle Prairie.

Evelyn Theresa Hilmerson was born on January 14, 1930, to Halver and Helen (Tretter) Hilmerson at the family home in Freedom Township near Little Falls, MN. She grew up on the family farm and attended school at a one-room school house through the 8th grade, later continuing her education in Little Falls and Minneapolis.

In 1949, she married Donald Loscheider. Together they had 13 children. In 1977, she married Ralph Hinnenkamp who preceded her in death at the age of 65.

Evelyn was a caregiver at heart, continually worried about everyone else but herself. Evelyn spent much of her spare time baking and canning. She enjoyed traveling to visit her children and grandchildren who are scattered across the United States. She thoroughly enjoyed spending time near the water whether it be fishing or walking on the beach. She was an avid Daniel ODonnell fan whom she saw several times and was known on a first name basis. In the moments where she wasnt baking, canning, traveling, or working, you may have found her near a slot machine. Evelyns pride and joy was spending time with her children, grandchildren, and great-grandchildren. She would stay up until the wee hours of the morning conversing to be certain she wasnt going to miss out on anything.

While Evelyn had many passions and joys in her life, her greatest joy was giving to others. Whether it be giving away her baked and canned goods, giving of her care, or giving gifts, she always had a smile while doing so.

She was preceded in death by her parents; two siblings, Margaret and Frank; husbands, Don Loscheider and Ralph Hinnenkamp; son, William Loscheider; and grandson, Jason Loscheider.

To order memorial trees or send flowers to the family in memory of Evelyn (Hilmerson) Biskey, please visit our flower store.