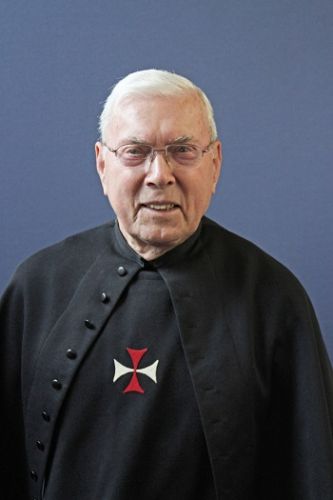 Gustin, Fr. Clement, OSC. Born October 2, 1925, to Michael and Rosa (Schmidt) Gustin in Flasher, North Dakota. Died in long-term care at Mille Lacs Health System in Onamia, Minnesota, on Saturday, November 2nd. He was 94. He attended Crosier Seminary Jr. College in Onamia beginning in 1946 and joined the Crosier Novitiate in Hastings, Nebraska, in 1949. He professed his Religious vows there on August 28, 1950, and was ordained a Crosier priest on May 28, 1955, also in Hastings.

Fr. Clem earned a Master of Arts degree in Classical Studies from Michigan University in 1964 and taught Latin in Crosier schools in Indiana and Onamia. He later worked in Crosier Province administration as Secretary to the Vicar General, Business Manager of Todays Family magazine, Vice Provincial, and Director of Novices.

In 2008, Fr. Clem retired to the Crosier Priory in Onamia where he joyfully contributed to the fraternal and liturgical/musical life of the community. He moved to Lake Song Assisted Living in Onamia and long-term care at MLHS approximately three years before his death due to health decline.

Fr. Clems funeral Mass will be celebrated at the Crosier Priory church in Onamia, MN, on Saturday, November 9, 2019, at 1:00 PM. A vigil will begin at noon, and burial in the Priory cemetery will follow the liturgy before a luncheon back at the Priory.

To order memorial trees or send flowers to the family in memory of Father Clement Gustin, please visit our flower store.