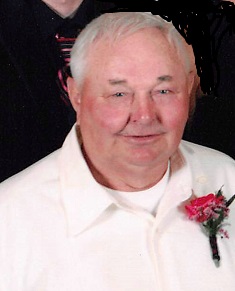 George Roman Wollack, 79, of Royalton, died Tuesday, February 7, 2017 at his residence. Visitation will be at Holy Trinity Catholic Church on Thursday from 4:00 PM to 7:00 PM and on Friday from 10:00 AM to 11:00 AM. Mass of Christian Burial will be held February 10, 2017 at 11:00 AM at Holy Trintiy Catholic Church- Royalton with Father Roger Klassen officiating. Interment will be in the Holy Trinity Parish Cemetery in Royalton.

He was born February 22, 1937 in Royalton, Minnesota to Louis and Monica (Gryzbeck) Wollack.George was united in marriage to Adella Jarnot on August 9, 1975 at Mount Carmel Catholic Church in Opole, Minnesota. The couple lived in Royalton where George farmed until his retirement. He enjoyed hunting, fishing, 4-wheeling and picking cans, helping and visiting neighbors, spending time with family friends. A special thank you to the angels at CHI Hospice and Father Klassen. The family greatly appreciates your kind expression of sympathy.

He was preceded in death by his parents, and wife, Rita Super.

To order memorial trees or send flowers to the family in memory of George Roman Wollack, please visit our flower store.