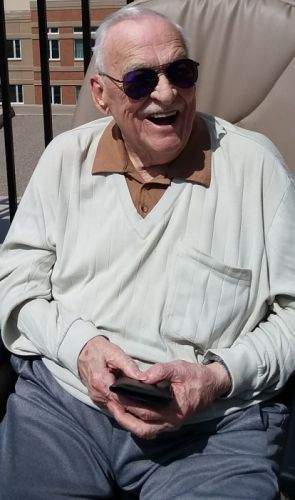 Gerald Jerome Justin was born on August 28, 1930 in St. Cloud, MN to the late John and Philomena (Petron) Justin. Jerry was raised in Rice and, then, Royalton, MN until high school when he moved to Fairibault.

After high school, Jerry was in the Merchant Marines (Coast Guard) and traveled the Great Lakes in the summer. He then served in the United States Army, where he was stationed in Kaiserslautern, Germany. Jerry married his childhood sweetheart, Patricia Billig. They lived in Duluth, then in Kaiserslautern, Germany and settled in Brooklynn Center where they raised four children. Jerry worked as a maintenance engineer in the dairy industry for many years. He was skilled at all manners of repair, installation and maintenance and held an electrician and high pressure boiler license. He invented many devices and is remembered fondly for his Jerry rigging.

In his later years, he was the main care-taker of Pat as her health deteriorated due to Huntingtons Disease.

In lieu of flowers, the family requests donations be made to the Huntington Disease Society of America (HDSA.org; 505 Eighth Avenue; Suit 902, New York, NY 10018) Make checks out to HDSA.

The casket bearers will be:

The arrangements for Gerald are with Emblom Brenny Funeral Service in Little Falls. 320-632-4393

To order memorial trees or send flowers to the family in memory of Gerald J. Justin, please visit our flower store.