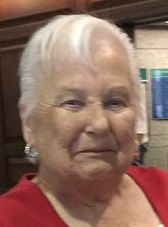 Gloria Jane (Litchy) Rudolph was born September 5, 1938 in St. Wendel to the late Conrad and Irene (Betker) Litchy. She attended country school in Brockway Township. Gloria graduated from Holdingford High School with the class of 1956. She was united in marriage to James Jim Rudolph on September 16, 1957 in St. Wendel. Throughout her life, Gloria worked for the following businesses: Fingerhut, Tri-Capp, Kraft Foods and Kaeter Trucking. She treasured her time spent as a home maker raising the couples five children. Gloria was a fabulous cook she always made sure there was plenty for everyone. She enjoyed painting, crafts, playing solitaire, visiting and socializing with friends and family, trips to the casino, traveling and time spent with her grandchildren and great-grandchildren. Gloria was a member of Immaculate Conception Church in Rice and a former member of St. Columbkile Church in St. Wendell.

She was preceded in death by her parents, Conrad and Irene Litchy and brother in law, Delmar Skroch.

To order memorial trees or send flowers to the family in memory of Gloria Jane Rudolph, please visit our flower store.