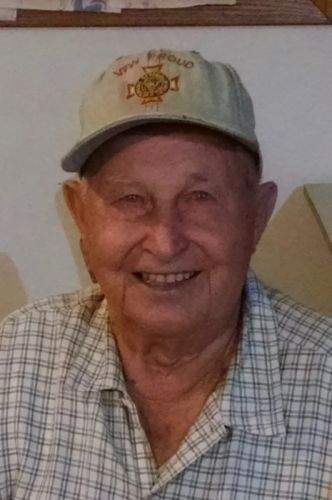 Gregor Henry Wessel, 94 year old resident of Swanville, MN died Tuesday, March 27 at the St. Cloud VA Medical Center. A Mass of Christian Burial will be held on Wednesday,April 4 at 11:00 AM at St. Johns the Baptist Catholic Church in Swanville with Father Ron Dockendorf officiating. The burial will be held in the parish cemetery. A visitation will be held from 4:00-8:00 P.M. on Tuesday, April 3 and from 10:00 A.M. until the hour of the service on Wednesday all visitation times will be held at the church. TheKnights of Columbus Council #14616 will pray the rosary at 5:00 P.M. on Tuesday evening at the church.

Gregor Henry Wessel was born August 15, 1923 in Melrose, MN to the late August and Mary (Austing) Wessel. He attended country school as a young boy. He served his Country in Japan during WWII in the United States Military. After his honorable discharge he returned to the Swanville area where he worked as a mechanic and also operated a dairy farm. He enjoyed restoring and collecting international tractors. Gregor treasured his time fishing, hunting and playing cards. He was a member of the Swanville American Legion and the Knights of Columbus. Gregor was a religious man and attending Mass was a very important part of his life.

Left to cherish his memory are his brothers, Robert of Sauk Centre, Delbert of Sauk Centre; 33 nieces and nephews, many great nieces and nephews; extended families, the Palms, the Koetters, the Kedrowskis, the Loxterkamps and many friends and neighbors. He was preceded in death by parents; brothers, Cyril and Norbert; sisters, Valeria, Hildegard, Bertha, Helen and Janet; Brothers in law, Bud Walters, Al Primus, Henry Theisen and Edward Jenc; sisters in law, Regina and Mickey Wessel.

To order memorial trees or send flowers to the family in memory of Gregor "Greg" Henry Wessel, please visit our flower store.