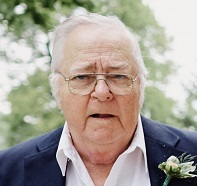 Harold Boser was born May 26, 1941in Platte Township, Morrison County, Minnesota to the late Henry and Johanna (Servaty) Boser. Harold attended school in Little Falls, MN, graduating with the class of 1959. He proudly served his country in the United States Army. Harold was united in marriage to Claudette L. Bucko on June 18, 1960. The couple made their home in Little Falls, MN. Harold started his law enforcement career working as a dispatcher for the Morrison County Sheriffs Office. He attended the Law Enforcement Program at the Alexandria Vocational School and received his Peace Officers license. Harold worked as a deputy sheriff and as a bailiff for the Morrison County Sheriffs Office. He retired after 34 years of service to Morrison County. Claudette died in November of 2002 and Harold continued living in Morrison County. He was united in marriage in 2003 to Wendy Corner in Little Falls, MN. The couple resided in Pierz, MN. He enjoyed camping, reading western books, playing bingo, gardening, canning and was an avid sports fan. Harold enjoyed his time with family, friends and coffee at the Red Rooster in Genola.

To order memorial trees or send flowers to the family in memory of Harold Michael Boser, please visit our flower store.