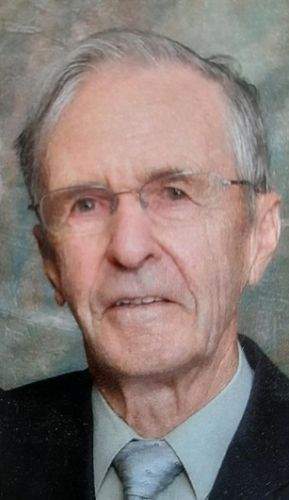 Herbert Peter Stumpf was born on October 27, 1922 in Agram Township, Morrison County, Minnesota to the late Edward and Regina (Terhaar) Stumpf. He attended Country school in Agram Township. He attended St. Cloud Technical and Community College, where he received his Small Appliance Repair Certificate. Herb was united in marriage to Elvira Kuklok on September 3, 1951 at Holy Trinity Catholic Church in Royalton. The couple made their home in Duluth for a short time, where Herb worked in the shipyards. The couple moved to rural Pierz where they raised their 10 children on the family farm. After retiring the couple moved into Pierz and resided on Park Avenue for several years. During his retirement years Herb worked for Pierz Foods and the Brenny Funeral Home. Herb enjoyed gardening, playing cards, wood working, volunteering, square dancing with Elvira and spending time with his family, especially his grandchildren and great-grandchildren. He was known as Grandpa Herb at Holy Trinity School. Herb was a member of St. Josephs Catholic Church, MCCL and was a Fourth Degree with the Knights of Columbus.

In lieu of flowers, memorials can be made to Holy Trinity Catholic school.

The arrangements for Herb are with Emblom Brenny Funeral Service in Pierz. www.emblombrennyfuneral.com

To order memorial trees or send flowers to the family in memory of Herbert "Herb" Stumpf, please visit our flower store.