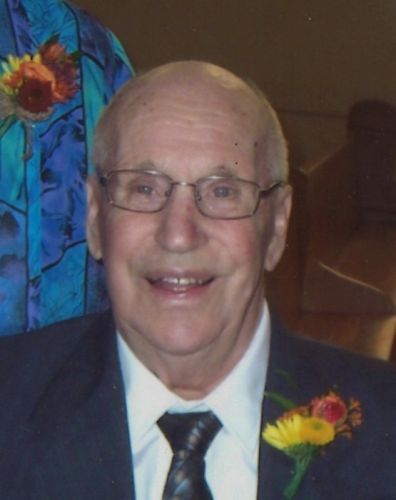 Herman E. Stangl, 84-year-old resident of Buckman, MN passed away Friday, October 7, 2016 at the Pierz Villa in Pierz, MN after a nine year courageous battle with Dementia. A Mass of Christian Burial will be held on Tuesday, October 11 at 10:30 at St. Michaels Catholic Church in Buckman, MN. A visitation will be held from 4-8 p.m. on Monday, October 10 at the church and from 9:00-10:30 a.m. on Tuesday at the church in Buckman, MN. The Christian Mothers Rosary will be said at 4:30p.m., Parish Prayers at 7:00 p.m. and Knights of Columbus Office of the Dead at 7:30 p.m. on Monday evening.

Herman Edward Stangl was born on August 7, 1932 in Pierz, Minnesota to the late Frank and Frances (Kruschek) Stangl. He attended elementary school in Pierz and graduated from Little Falls High School in 1951. Herman served his country in the United States Army from 1954 until his honorable discharge in 1956. After his discharge from the service, Herman worked for the Swift Company in St. Paul, MN, custom harvesting in the Dakotas and on the iron ore boat William A Irvin in Duluth, MN. He was united in marriage to Frances Piekarski on June 9, 1958 at Sacred Heart Catholic Church in Flensburg, MN. The couple made their home on the Stangl family farm. Hermanpurchased the family farm in the spring of 1958, where the couple farmed for 37 years. In 1983, the couple built a new home a half mile north of the family farm. Herman continued helping his sons on the farm, he was truly a farmer through and through. Herman enjoyed trying to grow the largest pumpkin in the county every year. He would make sure that it would always have plenty of water, shelter and nourishment. Herman enjoyed playing cards, gardening,selling sweet corn and was an avid Minnesota Vikings and Twins fan. He was a member of St. Michaels Catholic Church and was a choir member for 35 years. Herman served as Commander of the Pierz American Legion, Grand Knight of the Knights of Columbus St. Isadore Council, St. Michaels Society and the AMPI Board.

To order memorial trees or send flowers to the family in memory of Herman E. Stangl, please visit our flower store.