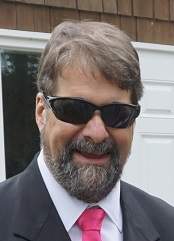 Jeffrey Eugene Schilling, 60 year old resident of Fort Ripley and former Morrison County Commissioner died Thursday, May 24 at his home. A Mass of Christian Burial will be held on Wednesday, May 30 at 11:00 A.M. at Holy Family Catholic Church Belle Prairie. A visitation will be held from 4:00-8:00 P.M. on Tuesday, May 29 at Emblom Brenny Funeral Service in Little Falls and from 9:00 A.M. until 10:15 A.M. Wednesday at the funeral home. The burial will be held at the parish cemetery.

Jeffrey Eugene Schilling was born March 10, 1958 in Staples, MN to the late George and Patricia (St. Pierre) Schilling. He was united in marriage to Leah Popilek on August 9, 1980, at Holy Family Catholic Church. The couple made their home in Fort Ripley. Jeff worked on small engines and as a dairy farmer in the Fort Ripley area. The last 21 years, he worked at Mary of Lourdes Elementary School as the Head Custodian. This was a job that he truly loved and enjoyed thanks to his co-workers and students. Jeffs hobbies included ATV riding, ice fishing, grilling with his smoker grill, giving out words of wisdom, and being a beer and chocolate connoisseur. He was a founding member of Central Minnesota Wheelers Association and a life-long member of Holy Family Church. If you hung around Jeff long enough you would have heard one of his classic one-liners: See God in All People, How About a Hug, Think Christian and Moral Thoughts, and Life is Good. He never met a stranger and he was loved by all, especially the Mary of Lourdes staff and students!

He was preceded in death by his grandparents Eugene and Florence St. Pierre and Mary and Joseph Schilling; parents, George and Pat Schilling; brother, Steve Schilling; nephew, Anthony Schilling; and mother and father-in-law, Marlene and Melvin Popilek.

In lieu of flowers, memorials are preferred.

To order memorial trees or send flowers to the family in memory of Jeffrey Eugene Schilling, please visit our flower store.