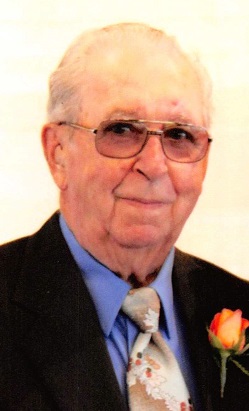 John Jack Saehr, 88 year old resident of Little Falls died Tuesday, August 22 at his home surrounded by his family. A Mass of Christian Burial will be held on Saturday, August 26 at 11:00 A.M. at Our Lady of Lourdes Catholic Church with Father Joseph Herzing officiating. The burial will be held in the parish cemetery. A visitation will be on Friday, August 25 from 4-8 PM and from 9:30-10:30 AM on Saturday all at Emblom Brenny Funeral Service. A parish prayer will be held at 7:30 PM on Friday evening at the funeral home.

John Jack Saehr was born June 25, 1929 in Genola, MN to the late Peter and Juletta (Faust) Saehr. He was raised and attended country school in Genola. He was united in marriage to Joan Elizabeth Zyvoloski on June 11, 1952 at Our Lady of Lourdes Catholic Church in Little Falls. The couple made their home in Little Falls where they raised their six children. John worked on the Iron Ore Boats on the Great Lakes for a few years. He then drove semi-trucks for several years covering 49 states. John drove for the following companies: Murphy, Larson Boats, Kaiser and Helena Chemical. He enjoyed watching the Minnesota Twins, playing cards with family and friends, hunting, fishing, making fishing decoys, gardening, playing guitar, horse shoes, and snowmobiling. His family remembers his excellent cooking and canning and time spent as a family.

Honorary Casket Bearers will be: the grandchildren of John Jack Saehr.

To order memorial trees or send flowers to the family in memory of John (Jack) Saehr, please visit our flower store.