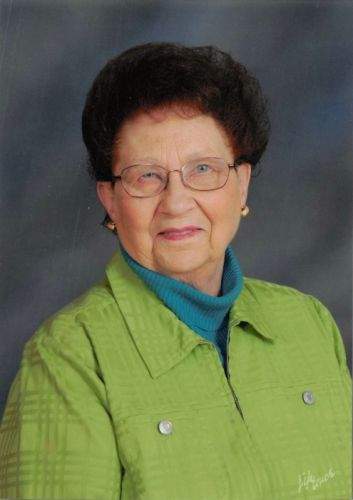 Cherishing the Memory of
Josephine Phinee Zak
Josephine Kokett was born on June 24, 1932 in Little Falls to the late Martin and Anna (Kupka) Kokett. She attended country school in Swan River Township until the eighth grade. She then attended and graduated from St. Francis High School in Little Falls. She was united in marriage to Fred Zak on July 19, 1951 at St. Stanislaus Catholic Church in Sobieski. The couple made their home on 12th Street SW in Little Falls for four years until moving to their home on 8th Street SW where she resided for over 65 years. Phinee drove school bus for 35 years and also bar tended part time at Herbies Bar in Sobieski. Fred and Phinee started West Side Recreation in 1970, where she served as the head book- keeper until her retirement in September of 2019. The family home was a place for the local neighborhood kids to gather. Phinee always made sure no one in the neighborhood went home hungry. She was active in her children activities serving as a Camp Fire Leader. She will be remembered for her giving heart, respect to others and hardworking ways. She had a strong faith and could be found either at daily mass or going to adoration Thursdays and Sundays. She attended Our Lady of Lourdes Church serving as bookkeeper for over 20 and was always willing to help with the annual bazaar and was a member of the Christian Mothers, Daughters of Isabella, Polish Echoes and the quilting group. She served in many organizations throughout her life, the Morrison County Recreational Trail Administrator for over 35 years writing grants and taking care of the payroll, the District President of the American Legion Auxiliary. Phinee loved to cook serving many church luncheons and breakfast over the years, she always made the best chicken and waffles and coffee cakes. She loved winter, flowers, sewing, quilting, watching Fox News, the cooking channel and spending time with her family and friends especially her grandchildren and great-grandchildren.

In lieu of flowers memorials are preferred to the Our Lady of Lourdes Kitchen Fund.

The arrangements for Phinee are with Emblom Brenny Funeral Service in Little Falls. 320-632-4393.

To order memorial trees or send flowers to the family in memory of Josephine "Phinee" Zak, please visit our flower store.