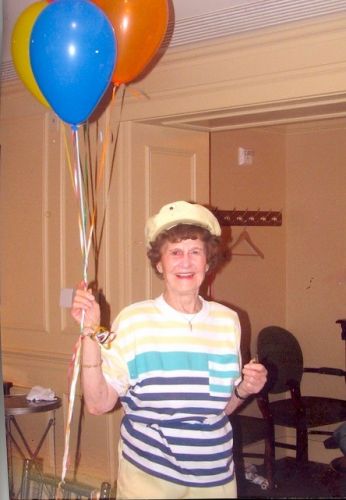 Joyce Fagen Kaiser passed away unexpectedly but peacefully on August 22, 2020, five days following her 103rd birthday. Joyce was born on August 17, 1917, in Northern Minnesota (outside International Falls near the Canadian border). She received her education after high school in Minneapolis and did legal work there until moving to Arlington, Virginia, in 1942, during World War II, as her husband was in the Navy, stationed in Washington, D.C.

She became, among other jobs, secretary to THE Willard Kiplinger, performed legal work, and held administrative positions throughout her career. She was Appointments Secretary to Ezra Taft Benson, Secretary of Agriculture, in the Eisenhower Administration. During that Administration she and her husband were invited to a reception to meet President Eisenhower and Mrs. Eisenhower at the White House, and they danced in the White House Gold Room. Joyce was also Colonel Earl (Red) Blaiks Girl Friday in Washington, and did court reporting. Her last paying job was involved with the Watergate hearings.

After retirement, Joyce, a devout member of St. Agnes Catholic Church in Arlington VA volunteered, at the church and parish school. One of her accomplishments was organizing both ladies and childrens bowling leagues and running them (there were 82 children bowling at that time); She also kept a close relationship with the children at the school communicating with them regularly until her death. She volunteered for many political campaigns. Joyces last volunteer work, for over ten years, was at the Arlington Free Clinic. Joyce made several lasting friendships at the clinic.

Joyce was a ranked duckpin bowler, both nationally (17th) and locally (6th), as well as a very avid Redskins fan (she was a season ticket holder attending all the games until the team relocated to Maryland). She enjoyed playing bridge, organizing many, many games and tournaments as well as hosting.

Another passion Joyce had was playing golf. She was a proud member of the Washington Golf and Country Club where Joyce and her husband, Ben, were members for over 50 years, developing many close, lifetime friends. She played through her 95th birthday.

She is preceded in death by her husband, Benedict, who died of lung cancer in 1981, and out of a family of eleven, children, Joyce was the last remaining survivor. Many nieces and nephews survive her.

A gravesite burial service will be held at the St. Stanislaus parish cemetery at noon on Friday November 6th. A live stream of the service will be on the Tri-Parish Catholic Community of Sobieski, Flensburg, Randall Facebook page.

A memorial mass will be celebrated, at a future date, with a gathering to follow when the Covid-19 virus abates.

To order memorial trees or send flowers to the family in memory of Joyce Kaiser, please visit our flower store.