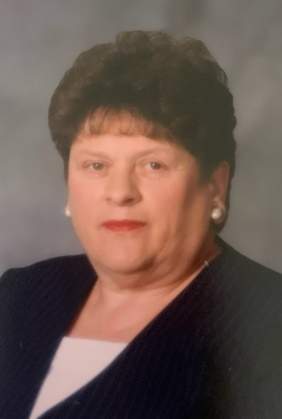 Karina Patnaude, 78-year-old resident of Fort Ripley died Wednesday, April 28 at the St. Cloud Hospital. A Mass of Christian Burial will be held on Saturday, May 1 at 10:30 A.M. at St. Joseph's Catholic Church in Pierz, MN with Father Kenneth Popp officiating. A visitation will be held from 4:00-7:00 P.M. on Friday, April 30 at Emblom Brenny Funeral Service in Pierz and from 9:00-10:00 A.M. on Saturday at the church. The burial will be held at Holy Family Catholic Cemetery Belle Prairie.

Karina was born on June 24, 1942 to Louie and Gertrude (Virnig) Przybilla in Little Falls, MN, the oldest of four children. She attended school in Pierz and graduated from Memorial High School in 1960. She was united in Marriage to Louie Patnaude on June 29, 1965 at St. Joseph's Catholic Church in Pierz, MN. Karina and Louie made their home in Pierz before moving to Louie's family farm in Fort Ripley, MN where she lived until her death. Karina went to work at Farmers and Merchants Bank right after high school where she worked for 50 years. Many people were thankful to her for getting them the loan when no one else would take a chance on them. Karina had a collection of over 1000 pairs of earrings that topped off every outfit she wore. Karina was known for always driving a red car no matter what make and model it was.

In her retirement she enjoyed recycling greeting cards for St. Gabriel's gift shop, trapping pocket gophers, and most of all playing bingo even though she "never won". Most precious to her was her family and especially her granddaughters.

Karina was preceded in death by her husband, Louie on September 22, 2010; infant son; parents, Louie and Gertrude Przybilla and a brother Terry Przybilla.

The arrangements for Karina are with Emblom Brenny Funeral Service in Pierz 320-632-4393.

To order memorial trees or send flowers to the family in memory of Karina Patnaude, please visit our flower store.