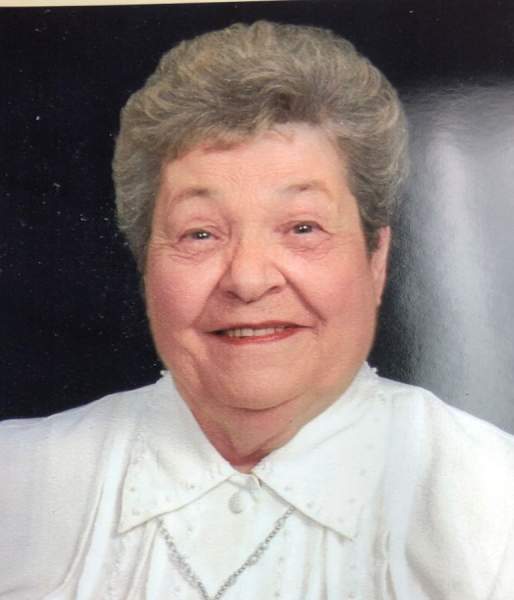 Lea Marie Block, 92 year old resident of Pierz, MN died Sunday, August 21 at the Pierz Villa Nursing Home. A Memorial Mass will be held on Friday, August 26 at 11:00 A.M. at St. Joseph's Catholic Church in Pierz with Father Kenneth Popp officiating. A visitation will be held from 9:00 A.M. until the hour of the service on Friday at the church. The Christian Mother's will pray the Rosary at 9:30 A.M. on Friday morning at the church. In lieu of flowers memorials are preferred to the Franciscan Sisters of Little Falls, MN. 816 2nd Street SE, Little Falls, MN 56345.

Lea Marie Rauch, the oldest daughter of John B. and Regina (Hoffman) Rauch, was born on December 17, 1929, at the home farm in Agram township, Pierz. She attended a one-room schoolhouse in Agram school district, and then graduated from St. Francis High School in Little Falls in 1948. On June 12, 1950, she married Rolland Block from Buckman. Their union was blessed with ten daughters. As a wife and mother, they farmed the Block homestead in Buckman for 7 years, then lived in various places after: Babbitt, East Grand Forks, a brick farm house on Highway 27, and another 15 years at a new home on Highway 27. They moved to Hillman in 1990 for 9 years, then constructed Westview Apartments in Pierz and lived in one of the units. Rolland died in 2012 and Lea continued to live there until her move to Rose Court. In her youth, Lea played piano with various bands. After graduation she worked at Little Falls Clinic until her marriage to Rolland. She did clerical work in Little Falls, at Redwood Industries, and was a para-cleric at Pierz High School. She also worked at Munsingwear, at a bank in Little Falls, at Grubers store in Genola, and sold Avon for many years. Lea's greatest gift was music. She belonged to the St. Joseph's choir in Pierz, was the organist at St. Rita's in Hillman and the Pierz Villa, was a Eucharistic Minister at St. Rita's in Hillman and at St Joseph's church in Pierz, was a CCD teacher at Hillman and Pierz, a member of Christian Mothers, attended a Bible Study group, a Catholic Aid member, and a charter member of the Genola Athletic Group. Lea was always busy. Not only with raising her girls, but with her many interests. She loved playing piano. There was always music in the house - with her leading the girls in songs. She loved to read and always had a book going and passed that love on to (most of) her daughters. She loved sewing and doing crafts, especially quilting and embroidery. Through necessity, she had a large garden which her girls helped tend. She grew pickles and took them to sell to the Gedney collection site in Pierz. But most of all she loved spending time with her family.

She was preceded in death by her parents; husband, Rolland; her brother, John; her sisters, Delores and Dorothy; her daughters, Marie, Sheila and Annette; her son-in-law, Randy; her brothers-in law, LaVerne Banach and Lou Hougan; and her great grandchildren, Neveah and Echo.

Emblom Brenny Funeral Service is Cherishing the Memory and Celebrating the Life of Lea. 320-632-4393

To order memorial trees or send flowers to the family in memory of Lea Marie Block, please visit our flower store.