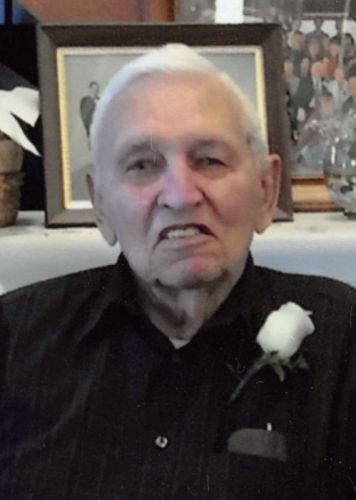 Leon Leidenfrost, age 90, of Pierz passed away Thursday, December 27 surrounded by the people he loved most, his wife and family. Mass of Christian Burial will be 10:30 A.M. Monday, December 31, 2018 at St. Josephs Catholic Church in Pierz. Father Kenneth Popp will officiate and burial will be held in the parish cemetery. Visitation will be held from 4:00 7:00 P.M. Sunday, December 30, 2018 at Emblom Brenny Funeral Service in Pierz and again from 9:30- 10:15 A.M. on Monday at the funeral home in Pierz. Parish prayers will be prayed at 6:30 P.M. Sunday at the funeral home.

Leon was born on March 20, 1928 to Fred and Angela (Kippley) Leidenfrost. He grew up on the family farm in Agram Township and attended the one room school there as well. He served in the Korean War from 1952 1954. On April 10, 1956, Leon married the love of his life, Josie Perleberg. Together they farmed their entire lives in AgramTownship where they lived until Leons death. They were blessed with four children, Debbie, Bill, Tom and Mary. Even though farming was hard work, Leon loved watching the crops grow and working with animals. He took time to do things he enjoyed, playing baseball and softball in his younger years, pitching horseshoes and playing cards in later years. Through these activities he made many lifelong friends. Leon served as Treasurer of Agram Township for 46 years. He was also an avid hunter and fisherman when farming allowed and enjoyed sharing these experiences with his children, grandchildren and great grandchildren. He enjoyed playing cards at family gatherings and was quite the competitive card player even up to the age of 90.

To order memorial trees or send flowers to the family in memory of Leon A. Leidenfrost, please visit our flower store.