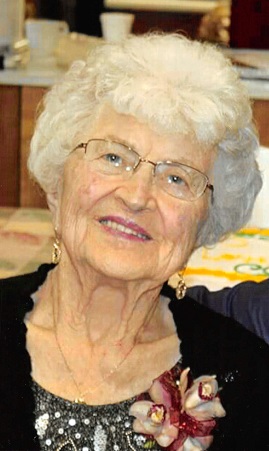 Leona Loretta Schneider, 91 year old resident of Sobieski died Sunday, December 17 at her home with her loving family by her side. A Mass of Christian Burial will be held on Friday, December 29 at 10:30 A.M. at Sacred Heart Catholic Church in Flensburg, MN with Father Jimmy Joseph officiating. The burial will be held in the parish cemetery. A visitation will be held on Thursday, December 28from 4:00-8:00 P.M. The Rosary will be said at 4:30 P.M. followed by Parish Prayers at 7:00 P.M on Thursday evening at the funeral home at Emblom Brenny Funeral Service in Little Falls and from 9:30 until the hour of the service at the church on Friday in Flensburg.

Leona Warzecha was born October 26, 1926 in Royalton, MN to the late Philip and Frances (Pintok) Warzecha. She attended rural country school near Royalton as a young girl. At the age of 16 she moved to Minneapolis where she worked at an artillery company making ammunition to assist with the war efforts. Leona returned to Morrison County when she met her future husband, Alphonse at a dance near her home. Leona was united in marriage to Alphonse Joker Schneider on May 15, 1946. The couple made their home in Swan River Township, Morrison County, Minnesota for 59 years. She worked as a certified nursing assistant for 31 years at Little Falls Care Center, formerly known as Lutheran Senior Citizens Home. The couple moved to Sobieski, MN in October of 2005. On July 12, 2006, Alphonse died and Leona continued living in Sobieski, MN. Leona was a member of the Rosary Sodality, St. Annes Missions, funeral lunch program Sacred Heart Catholic Church in Flensburg and St. Stanislaus Catholic Church in Sobieski. She enjoyed quilting, canning, baking especially her poppy seed coffee cakes, gardening, reading, picking berries, making homemade jams, 6-5-4 dice game, 500 Rummy card game and was known to hold her aces during that card game.

She was preceded in death by her husband, Alphonse Joker on July 12, 2006; son, Marvin Schneider on May 13, 1964; grandson, John on October 15, 1994; brother, Elmer Warzecha; sisters, Evelyn Benusa, Bernice Wollack and Loretta Benusa.

To order memorial trees or send flowers to the family in memory of Leona Schneider, please visit our flower store.