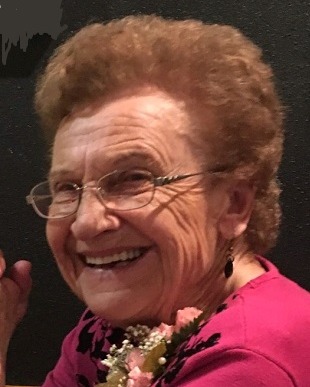 Leona (Smieja) Burggraff-Borg, 95-year-old resident of Upsala, MN, died Thursday, December 8 at Upsala Senior Living. Mass of Christian Burial will be held on Saturday, December 17, at 11:00 A.M. at St. Mary’s Catholic Church in Upsala. Visitation will be from 9:00-11:00 A.M. on Saturday at the church in Upsala. Burial will be in the parish cemetery.

Leona Celia Smieja was born on November 19, 1927, in Royalton, to Philip and Rose (Fussy) Smieja. She married Ralph Burggraff on June 19, 1945, in Royalton. They lived and farmed near Bowlus. Leona married Norman Borg on December 28, 1985, in Upsala where they made their home. Leona also lived in Little Falls before returning to Upsala where she resided at the Senior Living Center.

Leona liked cooking, baking, gardening, and quilting. She liked to dance when she had the opportunity. Leona was a faithful member of Lady of Lourdes in Little Falls and St. Mary’s Catholic Church in Upsala. She spent many hours cleaning and decorating the churches that were such a big part of her life. Leona was a member of the Daughters of Isabella. Leona and Norm enjoyed their winters in Texas for many years.

Emblom Brenny Funeral Service is cherishing the memory and celebrating the life of Leona. 320-632-4393.

To order memorial trees or send flowers to the family in memory of Leona Celia Smieja Burggraff-Borg, please visit our flower store.