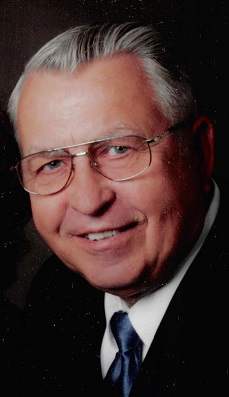 Leonard Joseph Jelinski, 83 year old resident of Wadena formerly of Little Falls died Tuesday, January 9 with his loving family by his side. A memorial mass will be held on Friday, January 12 at 10:30 A.M. at Holy Family Catholic Church in Belle Prairie with Father Joseph Herzing officiating. The burial will be held at a later time. A visitation will be held on Thursday, January 11 from 4:00-7:00 P.M. at Emblom Brenny Funeral Service and from 9:30 A.M. until the hour of the service on Friday at the church. A prayer service will be held at 5:30 P.M. on Thursday evening at the funeral home. The military rites will be conducted by the Little Falls American Legion Post #46.

Leonard Joseph Jelinski was born on June 29, 1934 in Flensburg, MN as one of eight children to farmers Joseph and Sophia (Super) Jelinski. As a young man he had an aptitude for math, something that helped him when playing card games. He had an early life of modest means. He enjoyed playing baseball as young man. Leonard enlisted in the United States Army and served his country from 1954-1956. He received his honorable discharge and returned to Minnesota. Leonard met Leona Koroll while dancing to the Blue Skirt Waltz. This was a turning point in his life, and he knew right away she was the one for him. The couple were united in marriage on October 15, 1956 at St. Edwards Catholic Church in Elmdale, MN. The couple settled in Freedhem, MN in 1960. They raised four children on the family farm, working hard every day to take care of the dairy cattle, pigs and grain crops. Together they were dedicated to strong Minnesota values, their family, community and church . In addition to farming, Leonard was a successful salesman for Trojan Seed Corn Company. He was awarded trips to Spain and Hawaii. He also loved his job at Crestliner Boats. He spent many hours driving across the United States. He viewed this as a great time of exploration and relaxation. In his retirement, Leonard enjoyed working with his son, Gary in his business. After the loss of his wife of 53 years, Leona, he moved to Wadena and developed all sorts of new interests, including flower gardening and new friendships. Contrary to popular beliefs old dogs can learn new tricks! Leonard valued the simple things in life, his home, good neighbors, children, grandchildren and great-grandchildren. He enjoyed playing cards, finding humor in life, and a good Black Velvet and Coke, no ice. He had the good fortune of meeting a companion, Norma who also had a love of dancing. Leonard was a life long member of the Little Falls American Legion Post #46, Holy Family Catholic Church, where he was active as an usher, planning committees and serving in any capacity that was needed. He also fried the donuts at the Little Falls Senior Center on early Thursday mornings.

Blessed Be His Memory...May He Rest In Peace, Amen.

A celebration of Leonards life will be held from 1:00-4:00 P.M. on Friday afternoon at the Little Falls American Legion Post #46

To order memorial trees or send flowers to the family in memory of Leonard Joseph Jelinski, please visit our flower store.