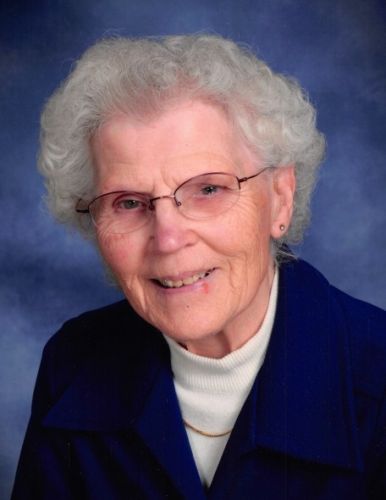 Loretta Krych, 90 year old resident of Platte Township passed away suddenly on Friday, March 22, 2019 at the St. Cloud Hospital. Mass of Christian Burial will be 11:00 AM Thursday, March 28, 2019 at Holy Cross Catholic Church in Harding. Father David Maciej will officiate and burial will be in the parish cemetery. Visitation will be 4:00- 8:00 PM Wednesday, March 27, 2019 at Emblom Brenny Funeral Service in Pierz and one hour prior to services on Thursday at the church in Harding.

Loretta E. (Block) Krych was born October 7, 1928 in Granite Township, Morrison County, Minnesota to the late Henry and Magdelena (Sand) Block. She was united in marriage to Roman Krych on October 7, 1947 at Holy Cross Catholic Church in Harding, Minnesota. The couple made their home in Platte Township, Morrison County, Minnesota. She enjoyed baking, cooking and playing Bingo. She was a member of Holy Cross Catholic Church in Harding. Roman passed away in 2001; Loretta continued living on the family farm.

To order memorial trees or send flowers to the family in memory of Loretta Krych, please visit our flower store.