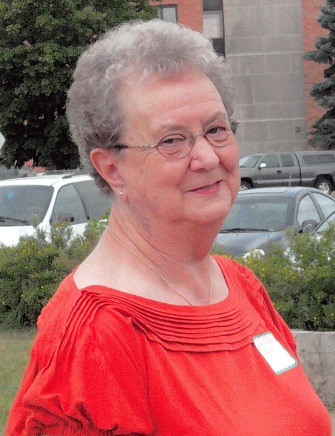 Lorraine Fafara was born on July 4, 1930 in Culdrum Township Morrison County to the late Mike and Florence (Lepinski) Fietek. The family moved to Flensburg when Lorraine was a young girl. She attended District #63 school in Flensburg through the eighth grade. After she completed her schooling, she helped her parents at the Deep Rock Service Station in Flensburg and this is where Lorraine met a handsome, young truck driver named Walter Fafara. The couple married on September 30, 1947 at Sacred Heart Catholic Church in Flensburg. They purchased a farm near Flensburg and called this home for the next 52 years, until Walters passing in 1999. While living in Flensburg, Lorraine was an active member of Sacred Heart Catholic Church. She was Eucharistic minister and sacristan for 18 years, member of the choir and the Sacred Heart sodality, group leader for funeral lunches, helped with custodial work and was church decorator. She loved to have fresh flowers on the altar. Lorraine moved to Little Falls in 2003, where she joined Our Lady of Lourdes Church. She continued donating her time to the church she loved and also volunteered at the Little Falls Senior Center, VA Medical Center in St. Cloud and St. Ottos Care Center. She was also a member of the Daughters of Isabella. Lorraine deeply loved her family and friends. She had many hobbies including feeding and watching the birds, decorating for the holidays, garage sales, baking, old-time music, playing cards, picking wild flowers and making flower arrangements. Her lawn and flower beds were always well kept.

The family thanks Little Falls Care Center and CHI Hospice for their kindness and support they provided to them and Lorraine these past months.

To order memorial trees or send flowers to the family in memory of Lorraine Fafara, please visit our flower store.