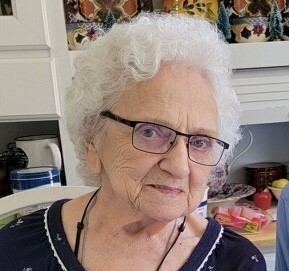 Lorraine Bruflat, 92-year-old resident of Little Falls died Tuesday, March 29 at St. Ottos Care Center in Little Falls. A funeral service will be held on Friday, April 1 at 11:00 A.M. A visitation will be held from 10:00 AM until the service on Friday at Emblom Brenny Funeral Service. The burial will be held at the Minnewaska Cemetery in Starbuck, MN. The funeral service will be lived streamed on the Emblom Brenny Funeral Service web site.

Lorraine Evangeline was born on December 5, 1929 in Cyrus, Minnesota to the late Martin and Mabel (Stockness) Steen. She grew up and attended school in Starbuck as a young girl. Lorraine graduated from the Little Falls Community High School. She took several college courses after high school. She was united in marriage to Charles Oscar Bruflat on December 24, 1946 in Starbuck. Charles died on March 24, 1974. Lorraine lived in Little Falls and worked as a paraprofessional with special needs children for many years in the Little Falls School district. Lorraine would walk to and from school four miles one way, every day since she loved working with children so much! She retired August 11, 1997 after 21 years and continued living in Little Falls until her death. She loved traveling internationally, reading, doing cross word puzzles in ink, cooking, baking, especially her apple pie, donuts, cinnamon rolls and playing bingo. She will be treasured and forever loved by her family. Lorraine was a member of First Lutheran Church in Little Falls since 1958. She served on the Ladies Guild. She was a member of the Little Falls American Legion Auxiliary and the Little Falls VFW Auxiliary.

Emblom Brenny Funeral Service is Cherishing the Memory and Celebrating the Life of Lorraine. 320-632-4393.

To order memorial trees or send flowers to the family in memory of Lorraine (Steen) Bruflat, please visit our flower store.