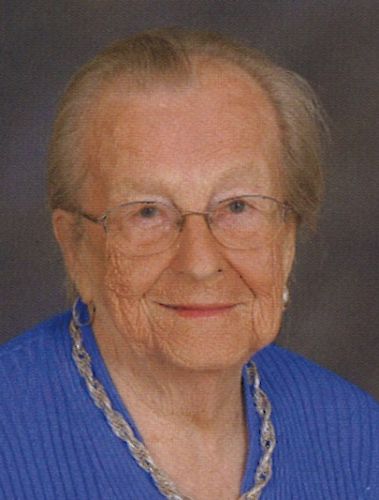 Louise Prozinski, 90 year old resident of Perham, MN formerly of Little Falls died Friday, July 1 at Prairie View in Perham, MN. A Mass of Christian Burial will be held on Thursday, July 7 at 11:00 A.M. at Our Lady of Lourdes Catholic Church with Father Tim Wenzel officiating. The burial will be held at the Minnesota State Veterans Cemetery north of Little Falls, MN. A visitation will be held from 9:00 A.M. until the hour of the service on Thursday at the Church. A Christian Mothers Rosary will be prayed at 9:45 A.M. on Thursday

Louise Emily Levno was born June 30, 1926 in Watertown South Dakota to Conrad J. and Emily C. (Stralka) Levno. She attended school in Watertown, South Dakota until the eighth grade. Louise was united in marriage to Norman Lunderby and the couple later divorced. She was united in marriage to Stanley Prozinski on May 23, 1969 in St. Paul, Minnesota. As a young women, Louise worked at Aresenol. She worked in various nursing homes as a health aide. She loved her flowers, gardening and crocheting.Louise loved her time spent with Stanley at their lake home near Dent, MN. The couple retired and moved to Little Falls, MN, where they resided for several years. Then due to her declining health Louise moved to Perham, MN to be closer to her family.Louise attendedOur Lady of Lourdes Catholic Church in Little Falls, MN.

She was preceded in death by her parents; husband, Stanley; sons, Gary and Norman Bud Lunderby, Jr.; daughter, Bonnie Setsvold and a son-in-law, Bob Setsvold.

To order memorial trees or send flowers to the family in memory of Louise Prozinski, please visit our flower store.