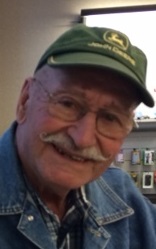 Mass of Christian burial for Marcel Kelash, 84 will be held at 10:30 A.M. on Friday, September 15, 2017 at Immaculate Conception Church, Rice, Minnesota. Visitation will be at Emblom-Brenny Funeral Home, Little Falls, Minnesota from 4:00 8:00 P.M. on Thursday, September 14, 2017 and one hour prior to service at the church. Rev. David Kelash will officiate and burial will be in the parish cemetery with Military Honors by Rice American Legion.

Marcel was born June 2, 1933 in Granite Ledge Township to John and Martha Kelash. He married Genny (Stachowski) Henry and later divorced. Marcel farmed in Princeton and Foley and owned a construction business for many years. He served in the US Air Force for 4 years, was a member of the Farmers Union for 15 years and served as Benton County Commissioner for 4 years.

Marcel enjoyed fishing, puzzles, reading a good western, dancing and woodworking. Marcel always stood up for his family but would always sit down for a beer.

Services inArizona will be as follows:

Visitation will be held at Westcott funeral home 1013 E Mingus Ave, Cottonwood, AZ, onSunday September 10th at 4pm followed by the Vigil service and Evening Prayer at 5:00pm and Rosary at 6:00pm.

To order memorial trees or send flowers to the family in memory of Marcel Kelash, please visit our flower store.