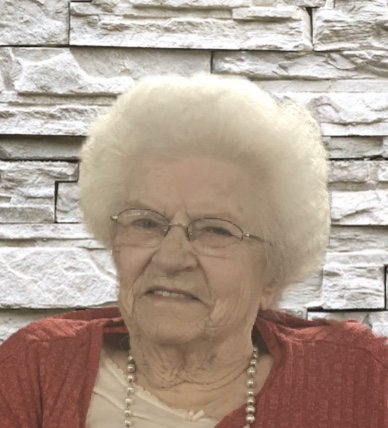 Marcella Doucette was born on August 11, 1926 in Belle Prairie Township, Morrison County, Minnesota to the late John and Josephine (Daveau) Doucette. She grew up in Belle Prairie Township where she attended District #42 country school. After completing her schooling, she returned to the family farm to help with the daily activities on the farm. Marcella was united in marriage to Alexander Alex Barton in 1947 at Holy Family Catholic Church in Belle Prairie. The couple made their home in Belle Prairie for a few years until moving to Sobieski. The couple then moved to North East Little Falls. Marcella worked at Montgomery Wards and was a volunteer for local and national elections in Little Falls. Alex died on June 7, 2002. Marcella continued living in Little Falls and became a resident of the Little Falls Care Center in November of 2017, where she resided at the time of her death. Marcella enjoyed playing cards, puzzles, food (especially watermelon), mylar balloons, attending local events, and most of all, dancing to Polka music with the love of her life, Alex. She was a member of St. Marys Catholic Church and former member of Holy Family Catholic Church. Marcella was active with the Little Falls VFW Auxiliary.Casket bearers will be Chris Worms, Ken Knopik, Jim Krych, Jerry Doucette, Kurt Knopik and Ry Meldaus.

She was precededin death by her parents, John and Josephine Doucette; husband, Alexander Alex Barton and 16 siblings.

The arrangements for Marcella are with Emblom Brenny Funeral Service in Little Falls, MN. 320-632-4393.

To order memorial trees or send flowers to the family in memory of Marcella (Doucette) Barton, please visit our flower store.