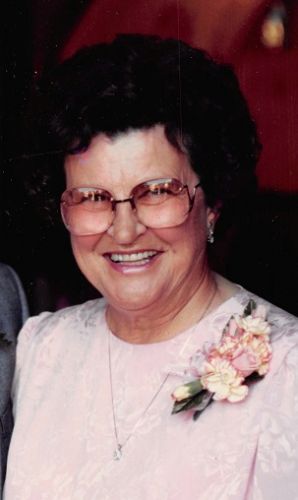 Marcella Surma, 95-year-old resident of Royalton, MN died Saturday, November 9 at the Country Manor in Sartell. A Memorial Mass will be held on Friday, November 15 at 11:00 AM at Holy Trinity Catholic Church in Royalton with Father Roger Klassen officiating. The burial will be held at St. Stanislaus Catholic Cemetery in Bowlus, MN. A visitation will be held from 9:30-11:00 AM at the church on Friday.

Marcella Selinski was born on March 10, 1924 in Bowlus, Minnesota to the late George and Martha (Kampa) Selinski. She attended school in Royalton. As a young woman she worked for Federal Ammunition for a few years. Marcella and four co-workers wererecruited welders to move to Portland, OR and worked as Rosie the Riveter for 2 years as ship builders. Marcella was united in marriage to Merrence Surma on July 16, 1946 at St. Stanislaus Catholic Church in Bowlus. The couple resided in Bowlus until moving to Royalton in 1971. Marcella was involved in Holy Trinity Church and was a member of the Christian Mothers. She was also a member of the Royalton American Legion Auxiliary. The family enjoyed many summers at the cabin on Girl Lake near Longville, MN. She enjoyed deer hunting, fishing, gardening, playing cards, trips to the casino, traveling, sewing, quilting and making homemade potato dumplings. She will be remembered by her children, grandchildren, great-grandchildren as loving, caring and compassionate.

The funeral arrangements for Marcella are with Emblom Brenny Funeral Service in Royalton.

To order memorial trees or send flowers to the family in memory of Marcella Surma, please visit our flower store.