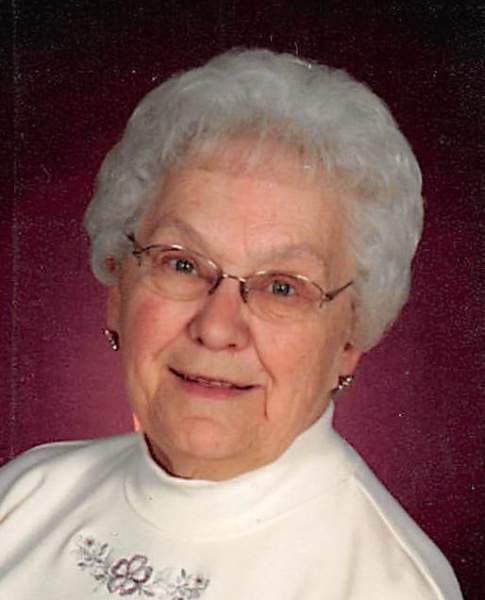 Margaret "Caroline" Schmidtz, 85-year-old resident of Lastrup died Saturday, August 7 as the result of an automobile accident in Little Falls. Emblom Brenny Funeral Service is Cherishing the Memory and Celebrating the Life of Caroline. A Mass of Christian Burial will be held on Friday, August 13 at 11:00 A.M. at St. Johns Nepomuk Catholic Church in Lastrup. A visitation will be held from 4:00-8:00 P.M. on Thursday and from 10:00 A.M. until the hour of the service on Friday all visitation times will be held at the church. A Christian Mothers Rosary will be said at 4:30 PM, American Legion Auxiliary Prayer at 5:00 P.M. and Parish Prayers will be said at 5:30 P.M. followed by the Knights of Columbus Prayer at 7:00 P.M.

Margaret 'Caroline" Wruck was born on April 28, 1936 in Fort Dodge, Iowa to the late Francis and Margaret (Hartling) Wruck. She grew up in and attended school n Rockwell City, Iowa. Caroline graduated with the class of 1954. The family moved to the St. Mathias area in 1958. She worked at the Pierz Villa Nursing Home and at Hickerson and Sons Garment Factory in Brained as a young woman. Caroline met her future husband, Donald Schmidtz at a dance at the Little Falls Ballroom. The couple was engaged in May and married in August. Caroline made the bridesmaids dresses and her own wedding dress. The family made their home in the Lastrup area. The couple were blessed with 12 children. She helped her husband, Donald on the family farm raising her family and helping with daily task on the farm. She returned to work at the Pierz Villa in 1988. Caroline was a faithful member of the following: St. Johns Nepomuk Catholic Church, Holy Trinity School volunteer, American Legion Auxiliary Member, Christian Mothers, MCCL Member and the Farmers Union. She enjoyed crocheting, word finds, puzzles, solitaire, scrabble. She treasured day trips with her family to various parts of the state. She also chaperoned many school trips with her children.

She was preceded in death by her husband, Donald; sons, Robert Schmidtz and Loren Schmidtz and a brother, Joe Wruck.


Emblom Brenny Funeral Service is Cherishing the Memory and Celebrating the Life of Caroline. 320-632-4393.

To order memorial trees or send flowers to the family in memory of Margaret "Caroline" Schmidtz, please visit our flower store.