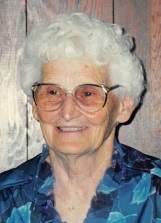 Margaret Olds Senlycki was born February 18, 1924 in Richland County, North Dakota along with her beloved twin brother Marcus to Andrew and Bessie (Hopkins) Olds. She was united in marriage to John E. Strempke Sr. on November 23, 1944 in Waterloo, Iowa. The couple had seven children. The couple lived and farmed in Roosevelt, MN, when he got out of the service for a few years. They moved to Oelwein, IA, where John worked for a John Deere factory, Rail Road and a warehouse. The couple later divorced. After the divorce, Margaret and the children moved back to Minnesota in 1957 to be close to her family. In, 1965 Margaret and three of the children moved to Osseo where she worked in a plastics factory. She met and married, Anthony Senlycki while living in Osseo. The couple bought a farm South East of Little Falls, where they lived until Anthony died in August of 2001. Margaret was always a kind person and helped with other family members children when hardships would hinder the family. Margaret was a foster parent for many years. She helped take care of her aging mother until her death. She loved gardening, rock gardening,embroidering, baking bread and making baked beans. going to concerts at the casino. She treasured her time spent with family..

To order memorial trees or send flowers to the family in memory of Margaret Patricia Senlycki, please visit our flower store.