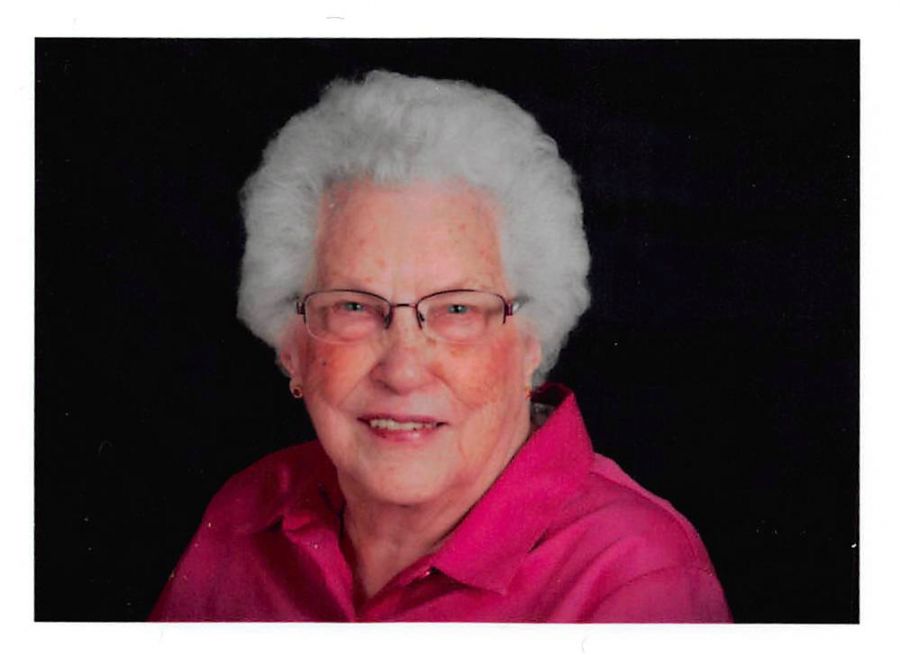 Marie Altrichter, 93 year old resident of Little Falls died Thursday, February 24 at St. Otto's Care Center in Little Falls, MN. A Mass of Christian Burial will be held on Saturday, March 5 at 11:00 A.M. at Our Lady of Lourdes Catholic Church with Father Mark Botzet officiating. The burial will be held in the parish cemetery. A visitation will be held from 4:00-7:00 P.M. on Friday, March 4 at Emblom Brenny Funeral Service and from 10:00 A.M. until the hour of the service on Saturday at the Church. The Christian Mothers and Daughters of Isabella will pray the rosary at 4:30 P.M. on Friday evening at the funeral home.

Marie was born on December 21, 1928, at St. Gabriel's Hospital in Little Falls, to George and Gladys (Kimball) Thesing, the second oldest of six children. She grew up on her parents' farm about five miles west of Fort Ripley in Clough Township, which later became part of Camp Ripley. While growing up, Marie attended District 43 through the 8th grade. She later earned her general education diploma. Marie was employed for several years at Munsingwear, and she also worked as a cook at St. Otto's Care Center and at St. Gabriel's Hospital.

Marie married Alex Frank Altrichter on August 10, 1948, at St. James Catholic Church in Randall, Minnesota. They were married for 56 years and raised nine children together. Marie loved spending time with her children and their families, her brothers and sisters, and her nieces and nephews, and attended all their celebratory events throughout the years. She also enjoyed spending time with her friends, playing cards, socializing, and solving the world's problems, all while picking up valuable information. She was blessed with good neighbors, who would visit with her, plow her driveway and mow her pasture. She was an avid traveler and also enjoyed quilting, dancing, fishing, and reading the newspaper. Marie was very interested in history and geography, and she especially appreciated a good map. Marie was a Republican and she took an active interest in politics, serving as an election judge for Green Prairie Township for several years. Marie's Catholic faith was very important to her. As a parishioner of Our Lady of Lourdes Catholic Church, Marie was a member of the Christian Mothers and Daughters of Isabella, and she also enjoyed making quilts for the annual quilt bingo. She was an active member of the Little Falls Senior Center and served on the board in several capacities. Marie was a life member of the VFW Auxiliary where she held several offices and served as poppy chairperson for a number of years. Marie enjoyed keeping in touch with relatives, both near and far, via hand-written letters and phone calls. At age 86, she traded in her spiral notebook and started using an electronic tablet to keep in touch with her family via email. She often wondered how she ever got along without it! Marie had a life-long interest in genealogy. She was instrumental in keeping the Kimball family history updated and looked forward to the annual picnic held each August at Lum Park in Brainerd. In 2012, Marie wrote and self-published a book entitled "Altrichter & Thesing, a Family History" which is truly a treasure that can be passed on to future generations. At the age of 92, after surviving Covid-19, she moved into St. Otto's Care Center and sold her home. She continued to engage in activities, attending Mass and leading the Rosary. She loved visits with friends and relatives to share stories and reminisce and to keep abreast of everyone's lives, and hosted card games in the activities room. Marie accepted life's changes with a positive attitude and was grateful for the life she was blessed to live.

Emblom Brenny Funeral Service is Cherishing the Memory and Celebrating the Life of Marie! 320-632-4393.

To order memorial trees or send flowers to the family in memory of Marie Anabel Altrichter, please visit our flower store.