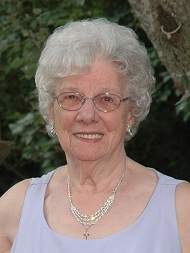 Marie E. Bleichner was born on July 8, 1926 in Hillman, Minnesota to the late George and Apolonia (Gast) Bleichner. She grew up and attended school in the Hillman area. She worked various jobs in the area: Larson Boats, Pierz Villa and as a nurses assistant at the Onamia Nursing Home. She was united in marriage to ReinhardPops Brausen. The couple later divorced. Marie moved to Ukiah, OR for a few years. She was united in marriage to Delwin Howard on December 3, 1977. The couple moved to Minnesota in 1986 and returned to Hillman, MN. She was a very active member of St. Ritas Catholic Church in Hillman. She participated in many church fund raisers and functions. She was a member of the Christian Mothers and praying the rosary daily was a priority. Marie enjoyed crocheting, reading, crafting, quilting, scrapbooking, being around the family especially the grandchildren. She treasured Christmass spent with her family and playing games.

To order memorial trees or send flowers to the family in memory of Marie Howard, please visit our flower store.